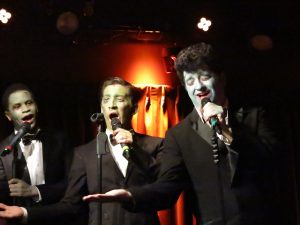 Definitely gonna be a SRO situation- so if you wanna go, don’t dilly dally around on the ticket buying front!

HALLOWEEN HIT comes to Boca Raton for ONE NIGHT ONLY!

One thing’s for sure, They may be Dead, But their voices aren’t!
Frank Sinatra, Dean Martin and Sammy Davis Jr. are back in the spotlight, back from the dead crooning their hearts out for the literally undead show that critics have raved blew them away and left them wanting more. Having come back from the dead, The Pack adds a spookish spin to their biggest hits, changing up their lyrics to honor their undead lifestyles. More comical than creepy, more entertaining than eerie, you’ll hear all of your favorite Rat Pack tunes with an “undead” twist, including “Come Die With Me,” “Ly Me in the Tomb”, “What Kind of Ghoul Am I?”, and many more!

My name is Jeff. I was born and bred in Brooklyn, New York. Since 1991, I have lived in South Florida and have eaten in so many restaurants down here, that I now consider myself to be a food expert. END_OF_DOCUMENT_TOKEN_TO_BE_REPLACED