Did You See This Guy Howard Schultz Last Night On CNN?

* Did You See This Guy Howard Schultz On Last Night On CNN?

Well I did- and I gotta tell you that billionaire Schultz (who by the way is the founder and former CEO of Starbucks Coffee) ought to forget about running for President in 2020- the man sounded like a confused bumbling moron! After listening to this guy for over an hour, I can’t figure-out how he’s made so much money! 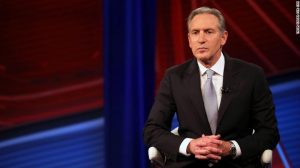 (CNN)Not-yet-announced-but-almost-certain-to-run-as-an-independent-presidential-candidate Howard Schultz shared a town hall stage with CNN’s Poppy Harlow in Houston on Tuesday night, fielding questions from voters about his time as the founder of Starbucks, his views on issues like taxes and health care and whether he would keep running if it looked liked he might hand President Donald Trump a second term.

18 Comments to “Did You See This Guy Howard Schultz Last Night On CNN?”

My name is Jeff. I was born and bred in Brooklyn, New York. Since 1991, I have lived in South Florida and have eaten in so many restaurants down here, that I now consider myself to be a food expert. END_OF_DOCUMENT_TOKEN_TO_BE_REPLACED