First told you guys about Harrison Greenbaum’s upcoming (Friday, 2/15 & Saturday, 2/16- 7:30pm) shows at the Mizner Cultural Center in Boca Raton on 2/5/19. Just checked the box-office miznerparkculturalcenter.com and goldstar.com (discount tickets) and both shows have a small handful of tickets still available. I’m telling you guys- you don’t want to miss Harrison Greenbaum: What Just Happened? A Comedy + Magic Show. 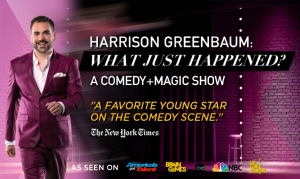 Don’t miss award-winning magician and comedian, Harrison Greenbaum, who has been featured on ABC’s “America’s Got Talent,” NBC’s “Last Comic Standing,” National Geographic’s “Brain Games,” and more – as he brings us on a gut-busting, jaw-dropping ride through the amazing, hilarious and the unusual!

Experience a theatrical magic and comedy extravaganza that deftly combines “smart, witty, and lightning quick punchlines” (SceneTracker) with jaw dropping, cutting-edge illusions, mind reading and legerdemain. This show is a unique blend of Harrison’s award-winning comedy, which he has performed at comedy clubs and festivals around the world, with original magic, much of it invented specifically for this show and never before seen. 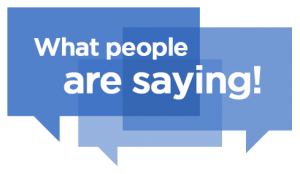 “A favorite young star on the comedy scene.” -The New York Times

“One of standup’s hottest rising stars, this artist is, without a doubt, one of the most unique acts you’ll ever see.” -am New York

My name is Jeff. I was born and bred in Brooklyn, New York. Since 1991, I have lived in South Florida and have eaten in so many restaurants down here, that I now consider myself to be a food expert. END_OF_DOCUMENT_TOKEN_TO_BE_REPLACED