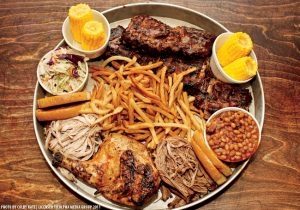 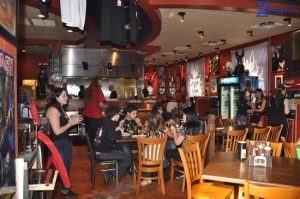 Rock N Roll Ribs is a “bbq joint”…it opened about 3 months ago…one of its co-owners is Nicko McBrain, the legendary drummer of the metal-band Iron Maiden…by the way, Nicko lives in Boca Raton. So, you now know— how “it” probably got the name Rock N Roll Ribs. The joint, has videos of bands playing, records on the wall, hanging guitars and a drum set as its decor. Rock N Roll Ribs is located in a shopping center on State Road 7…I think there are more empty stores than going businesses. Personally, I think that the spot stinks, but hey, it ain’t my dime! The joint isn’t all that big, maybe 80 seats. From what I understand, although Nicko is one of the owners and hangs out there- when he is in “town” (he wasn’t there, last night), it is run by “Moby” Rick Baum who according to the joint’s “pr” has an extensive background in developing/ opening/ running restaurants—the guy also plays guitar in Nicko’s (other band) McBrain Damage… What I can tell you, based on last night’s meal, this guy Moby Rick knows his bbq.

My name is Jeff. I was born and bred in Brooklyn, New York. Since 1991, I have lived in South Florida and have eaten in so many restaurants down here, that I now consider myself to be a food expert. END_OF_DOCUMENT_TOKEN_TO_BE_REPLACED