* This millennial’s company makes millions buying from Walmart and reselling on Amazon.

Amazing what some people think of…

Millennial’s company made over $6M reselling clearance items on Amazon

One man’s clearance aisle is another man’s treasure.

So goes the mantra for Ryan Grant, a 30-year-old entrepreneur whose company notched over $6 million in sales last year, in part by buying items at his local Walmart and reselling them on Amazon. 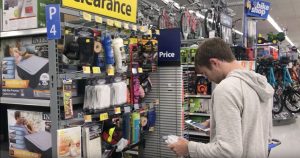 Grant’s experiment as an Amazon reseller started small. In college at Winona State University, he sold used textbooks on the site and got familiar with tracking just how in-demand certain books or products were. Years later, after growing bored with his job in accounting, Grant rekindled the same scheme with products he found on sale at his local Walmart. Scooping and scanning everything in the aisles from toys, to vacuums, to kitchenware helped reveal which items were selling for a higher price online.

“At the very beginning it was just me doing this out of half of a duplex that I was owner-occupying so there was product literally in every room of the house,” he said.

When he started making just as much through his side hustle as he was from his accounting day job, he decided to quit in 2013.

“It’s turned into a lot more than that today,” he said. “We’re still doing the retail arbitrage where we’re buying in retail stores and it’s expanded into buying from manufacturers and distributors of existing brands as well but it really all began with retail arbitrage.”

Now, Grant has moved his flipping operation to a 3,800-square-foot office with a staff of about 10 employees helping ship in bulk to Amazon. Selling through Amazon’s “Fulfilled by Amazon” program means individual orders are processed by Amazon out of their own warehouses, sparing Grant and his team the pain of shipping each individual order. He’s also started to branch out into selling on eBay and Jet, as well as his own e-commerce sites rather than relying solely on Amazon.

“Amazon is making reselling a little bit more complicated than it has been in the past,” Grant said, adding that restrictions implemented by Amazon makes selling certain brands more tricky.

That said, sales continue to grow — from about $3.5 million in 2017 to $6.1 million in 2018. Despite the sales increase, Grant has dialed back his own annual salary to around $60,000 to instead opt to reinvest profits into the business. While that seems low, Grant said he’s only spending about 15 hours a week on the project as his staff handles day-to-day logistics, and is free to travel and work remotely.

Apps like InventoryLab’s Scoutify 2 helped Grant see detailed sales data for a given product on Amazon, which would help guide what purchases he’d make.
“It’s to the point where I can be pretty much anywhere thanks to the team I have in place,” he said via Skype from Thailand.

That, and the prospect of where the business could go as he looks to invest more into selling products directly to customers off Amazon, has Grant increasingly happy about his decision to quit that accounting job six years ago.

My name is Jeff. I was born and bred in Brooklyn, New York. Since 1991, I have lived in South Florida and have eaten in so many restaurants down here, that I now consider myself to be a food expert. END_OF_DOCUMENT_TOKEN_TO_BE_REPLACED