This article first appeared on 10/16/18.
Just checked the box-office (fauevents.universitytickets.com) and there are a handful of really good seats left for this show. Just a heads-up, the reunited- The Cyrkle (which disbanded over 50 years) is off the chart dynamite- and is an absolute must see! 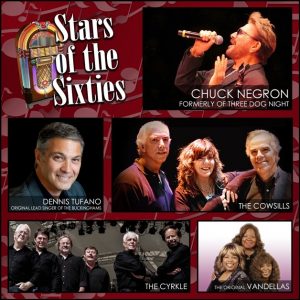 from poprockdoowopp.com
Stars of the 60s return to FAU with what might be our biggest cavalcade of hit-makers yet! Starring… Chuck Negron, formerly of Three Dog Night (lead singer of “Joy to the World”, “One”, “An Old Fashioned Love Song”, “Easy to be Hard”, “Pieces of April” & many more), the reunion – after 50 years – of The Cyrkle (“Red Rubber Ball”, “Turn Down Day”), Rock & Roll Hall of Famers The Original Vandellas (“Dancin’ in the Streets”, “Heatwave”, “Jimmy Mack”, “Nowhere to Run”), Dennis Tufano, original lead singer of The Buckinghams (“Kind of a Drag”, “Don’t You Care”, “Susan”, “Hey Baby! They’re Playing Our Song”) and a very special unplugged performance by The Cowsills (“The Rain, the Park and Other Things”, “Hair”, “Indian Lake”). A fun one-night-only reunion of the artists who created the soundtrack of your lives – featuring 9 original members amongst these 5 of the biggest hit-makers of the 60s! Presented by the producers of Pop, Rock & Doo Wopp Live!, Praia Entertainment Group.

My name is Jeff. I was born and bred in Brooklyn, New York. Since 1991, I have lived in South Florida and have eaten in so many restaurants down here, that I now consider myself to be a food expert. END_OF_DOCUMENT_TOKEN_TO_BE_REPLACED