This story first appeared on January 3, 2019.
Just checked the Boca Black Box box-office (bocablackbox.com) and goldstar.com (discount tickets) and there are a handful of real good tickets left for tonight’s show. Trust Jeff Eats on this one, if you like Frankie Valli & The Four Seasons- then you will absolutely love A Tribute To The Jersey Boys w/William Cintron. Jeff Eats and Mrs. Jeff Eats have seen the show twice and I am telling you guys- that it’s absolutely terrific. 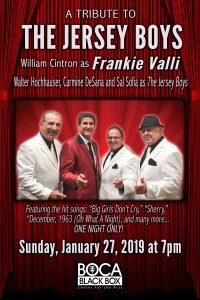 * A Tribute To The Jersey Boys w/William Cintron.

Jeff Eats and Mrs. Jeff Eats have seen the show twice- trust me when I tell you- absolute dynamite!

A Tribute To The Jersey Boys w/William Cintron

Don’t miss a tribute show unlike any other, A TRIBUTE TO THE JERSEY BOYS, starring William Cintron, Carmine DeSana, Walter Hochhauser and Sal Sofia – featuring the hit songs “Big Girls Don’t Cry,” “Sherry,” “December, 1963 (Oh What A Night), and many more – live at THE BOX!

Walter Hochhauser, Carmine DeSana and Sal Sofia as The Jersey Boys
Walter Hochhauser was born in Brooklyn, NY, and moved to Florida in 1961 where he began singing in some of Miami’s most notable hotels. In 1980, he joined REUNION as the lead singer, playing local venues and Rock N’ Roll shows throughout the state and in the Bahamas. In 2004, REUNION recorded the CD “Miracles,” featuring Walter on lead for many of their arrangements. In 1999, Walter had the privilege and pleasure of recording vocal tracks for Dion DiMucci’s “New Master’s” Album, and today, continues to record songs with Dion being seen and shared through social media.

My name is Jeff. I was born and bred in Brooklyn, New York. Since 1991, I have lived in South Florida and have eaten in so many restaurants down here, that I now consider myself to be a food expert. END_OF_DOCUMENT_TOKEN_TO_BE_REPLACED