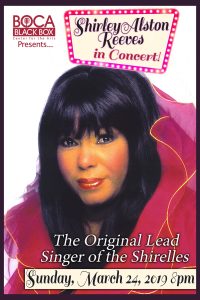 Don’t miss this one!

Shirley Alston Reeves, formerly of the Shirelles, co-founded the group and sang lead vocals for them. Their very first single release “I Met Him on A Sunday”, which was also written by the Shirelles collectively, was an instant success!

The Shirelles soon became known throughout the world when they placed six singles in the Top Ten. “Will You Still Love Me Tomorrow”, (written by Carole King), was featured in the colossal hit movie “Dirty Dancing” with Shirley on lead vocal. Ms. Reeves also co-starred in the Rock ‘n’ Roll film with the Shirelles “Let the Good Times Roll.” All time Shirelles favorites include “Tonight’s The Night” (penned by Ms. Reeves), “Baby It’s You”, the soulful sounding “This Is Dedicated To The One I Love”,” Foolish Little Girl”, and of course, the group’s 5 million selling hit “Soldier Boy”.
1996 Rock ‘n’ Roll Hall of Famer Shirley Alston Reeves is loved by all who have had the pleasure of meeting and hearing her golden vocals.

My name is Jeff. I was born and bred in Brooklyn, New York. Since 1991, I have lived in South Florida and have eaten in so many restaurants down here, that I now consider myself to be a food expert. END_OF_DOCUMENT_TOKEN_TO_BE_REPLACED