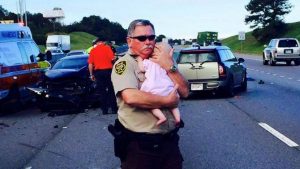 We also know that this is what these men/women do each and every day!

On a lighter note…

You guys ever wonder “why” cops and donuts are associated with each other? 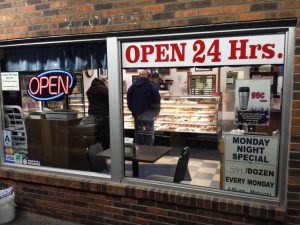 Dan asks: How did the running gag of police always eating donuts come about?

cop-donutMembers of law enforcement stuffing their faces full of donuts is one of the most enduring stereotypes about the boys and girls in blue. In virtually every media representation of the police that isn’t deadly serious, the stereotype is played out in some way- Police Academy, The Simpsons, Family Guy, hell, in Wreck-it Ralph the police officers are literally sentient donuts. So where and when did this stereotype start?

As to the “when”, that isn’t clear. However, I was able to find one person who said his grandfather, who had worked as a police officer starting in the early 1950s, told him donut shops were a hot spot for cops to stop at during certain times even then. So whether the general public picked up on it way back then, the practice goes back at least that far, and probably further.

As to why donut shops were so popular among the police, the answer is simple. Up until quite recently in history most food establishments, and also the majority of stores, closed fairly early in the evening and stayed closed all night.

There were basically two options for an officer working the graveyard shift who wanted a snack and a cup of fairly good quality coffee- diners and donut shops. Diners were generally out because their food took time to prepare and a police officer could get called away at any time. So that left the donut shops, which were often open throughout the night, or at least in the very early a.m. because they had to have fresh donuts baked and ready for the morning rush.

In addition to that, one officer stated that it isn’t just about the coffee and readily available snack either. There’s also the fact that most donut shops have a place to sit down. Particularly for officers in cities that walk the beat, instead of sitting in a climate controlled car, this is handy. It’s just nice to have a place out of the weather to take a load off on a break. The coffee and donuts are just a bonus. In addition to that, cops working the night shift who had patrol cars, also liked the well-lit place to sit down and do paperwork, which, as many police lament, is a huge part of their job.

Though today there are a multitude of places open 24 hours a day, it would seem donut shops are still the choice for a decent portion of officers. For example, during the Boston Marathon Bombings one of the only places that wasn’t completely locked down were several select Dunkin’ Donuts, that remained open to serve the police.

However, this donut/cop tradition is noted by some officers as a generational thing, when this website interviewed younger officers during national donut day (yes, that’s a thing), most were quick to point out that donuts were simply too sugary for the modern, trim, health conscious officer on the go. Citing bagels as a healthier alternative… (I just… hmmm)

Bottom line, even today if you’re a cop working at 3am and have a stack of paperwork to do, but have to be ready to get up and leave at a moment’s notice, your choices are typically fast food restaurants and donut shops, the latter of which generally have much better coffee, which for most police is probably a much bigger reason to hit the donut shop than the actual donuts. After all, you can pack your lunch, but unless you have a heating contraption in your car, hard to keep coffee hot for a full night shift, and certainly impossible if you’re walking the beat.

Now that it’s a running gag, confirmation bias makes sure even if it’s just a small percentage of police that hit up donut shops today, the stereotype will live on.

My name is Jeff. I was born and bred in Brooklyn, New York. Since 1991, I have lived in South Florida and have eaten in so many restaurants down here, that I now consider myself to be a food expert. END_OF_DOCUMENT_TOKEN_TO_BE_REPLACED