Posted on December 23rd, 2018 · Chinese Dish Of The Week Orlando 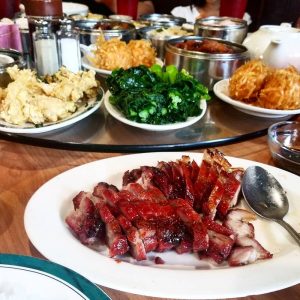 The only thing that I can tell you guys…if this Chinese joint was within “striking distance” of Jeff Eats and Mrs. Jeff Eats’ Boca Raton abode, we would be real steady customers.

Jeff Eats would be doing Ming’s Bistro a huge disservice by just singling out dishes like its bbq beef ribs ($12.95) or for that matter its sweet & sour chicken ($10.95) for special mention!

Trust Jeff Eats when I tell you- this joint’s food absolutely kills!

Got a real-good Chinese joint for you guys…Ming’s Bistro in Orlando.

Just so you know, Ming’s doesn’t have a website to check menu/prices, but trust me, its got a ton of stuff for you guys to eat–all at neighborhood Chinese joint prices.

The joint does have the requisite no frills “décor”-lots of “red signage”- hanging roast pigs and ducks- oil cloth/tablecloths-waitresses who “make” like they don’t understand you, etc.

Ming’s Bistro is a real good joint to know about. Like it says at the “top” it’s in Orlando-so if you live in that neck of the woods- definitely give it a shot! For you folks from out of the area, the next time you’re doing Disney, Universal, Sea World–skip the chains and do this mom & pop.

My name is Jeff. I was born and bred in Brooklyn, New York. Since 1991, I have lived in South Florida and have eaten in so many restaurants down here, that I now consider myself to be a food expert. END_OF_DOCUMENT_TOKEN_TO_BE_REPLACED