First told you guys about Old Jews Telling Jokes on 8/11/18. Just checked the Mizner Park Cultural Center’s box-office and there are a handful of real-good seats left for the shows’ January-February run. Trust Jeff Eats on this one, I’ve seen the show and it’s absolutely hilarious! Don’t miss this one! 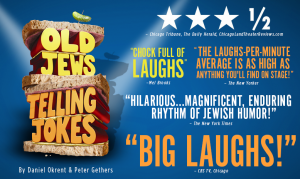 Get ready for an outrageous evening of one-liners, double-entendres, songs, skits and hysterical routines sure to triple you over with laughter!

Created by Peter Gethers and Daniel Okrent, OLD JEWS TELLING JOKES showcases five actors in a comedy that pays tribute to and reinvents classic jokes of the past and present.

Like rye bread, Kosher pickles and bagels, this show is for everyone! You’ll laugh till you plotz.

My name is Jeff. I was born and bred in Brooklyn, New York. Since 1991, I have lived in South Florida and have eaten in so many restaurants down here, that I now consider myself to be a food expert. END_OF_DOCUMENT_TOKEN_TO_BE_REPLACED