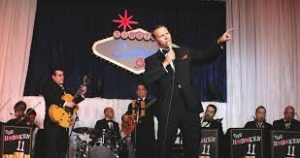 Got a terrific show for you guys…

Just in case you guys need some convincing as to how good Grainger, Villano and Johnny T are…

Jeff Grainger know as the Miami Crooner with his Hoboken 11 Big Band brings his ultimate tribute to Frank Sinatra to Kings Point Theater.
His unique stage presents and voice inflections make you think you are really listening to the Chairmen of the Board.
Born in Michigan he returns every year as he has been selected to participate in a major Sinatra tribute called Jack Daniels Day .
He is called upon for every major Sinatra function throughout Fla. because of his spot on performance of Sinatra.
Joining Jeff on stage will be Lou Villano. Lou brings to the stage his Paul Anka Songbook Show. He is known as one of the top tribute artist in
the country paying tribute to Paul Anka.He covers both Paul Anka’s songs he wrote and recorded. He too resembles Paul Anka which gives you
sense you are seeing Paul Anka live on the stage.
The third performer is Johnny T. He has been selected by Billboard as one of the top tribute performers in the country. Along with the big band
Johnny T will be performing the hits of Bobby Darin, Dean Martin & Bobby Vinton plus some of your favorite Oldies.
For tickets call 561-499-3335 or on line at kingspointboxoffice.com

My name is Jeff. I was born and bred in Brooklyn, New York. Since 1991, I have lived in South Florida and have eaten in so many restaurants down here, that I now consider myself to be a food expert. END_OF_DOCUMENT_TOKEN_TO_BE_REPLACED