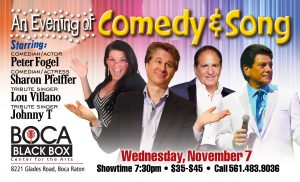 * An Evening of Comedy & Song.

An Evening of Comedy & Song

This is a Night of Entertainment you don’t want to miss out on.
LAS VEGAS performers are giving a ONE-NIGHT STAND.

Peter J. Fogel is one of America’s funniest comedians that you’ve never heard of… but have seen countless times on television. From comedy clubs, to cruise ships and Las Vegas theaters, he’s opened for such stars as Rita Rudner, Jimmy “J.J” Walker and Robert Wuhl (HBO’s Arliss).

Johnny T was named the Best Tribute Singer by Billboard Magazine.
His Tribute to Frankie Vali, Frank & Dean, & Neil Diamond and many other
sound like you are hearing the original artist.

My name is Jeff. I was born and bred in Brooklyn, New York. Since 1991, I have lived in South Florida and have eaten in so many restaurants down here, that I now consider myself to be a food expert. END_OF_DOCUMENT_TOKEN_TO_BE_REPLACED