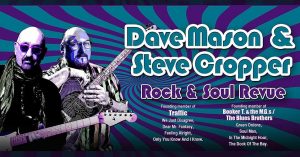 Mason and Cropper are legendary rockers!

This is going to be a great show.

Rock and Roll Hall of Famers Dave Mason and Steve Cropper join and play together for the first time on one stage to deliver a night of timeless music and endless hits, performing material that defined a generation. Founding member of the band Traffic, Dave Mason is a highly successful solo artist, songwriter and producer, and has performed and recorded with numerous members of the pantheon of pop and rock and roll music including Jimi Hendrix, George Harrison, Paul McCartney, Stevie Wonder, Michael Jackson, Eric Clapton, Graham Nash, Fleetwood Mac, and more. Steve Cropper, member of Booker T and the MG’s, the Stax Records house band during the label’s most influential period, backed artists such as Otis Redding, Carla Thomas, Wilson Pickett, Sam & Dave and Rufus Thomas and member of The Blues Brothers Band. Don’t miss this timeless Rock & Soul Revue. With Special Guest Gretchen Rhodes.

My name is Jeff. I was born and bred in Brooklyn, New York. Since 1991, I have lived in South Florida and have eaten in so many restaurants down here, that I now consider myself to be a food expert. END_OF_DOCUMENT_TOKEN_TO_BE_REPLACED