This story first appeared on August 2, 2018. Just checked the Boca Black Box- box office (bocablackbox.com) and goldstar.com (discount tickets) and there are a handful of really good seats still available for tonight’s (Saturday, 9/15/18 10pm) show. Jeff Eats and Mrs. Jeff Eats got tickets- and the bet here is that Dan Sperry is gonna put on an absolutely amazing show! Trust me- I know that a 10pm “start time” is definitely pushing its luck (with many of you guys)- so suck it up- take an afternoon nap and go see Shock Illusionist- DAN SPERRY- Anti-Conjuror! It’s gonna be some-show! 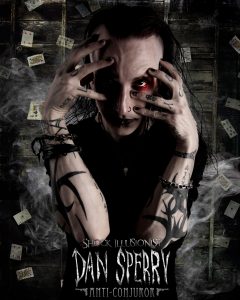 This is gonna be some show!

from bocablackbox.com
As seen on America’s Got Talent, Dan Sperry is the most popular modern illusionist of his generation. His fascination with the art of magic began when he was four years old and he performed his first paid show at age 11. By the time he was 17 Anti-Conjuror™ Dan Sperry was already an internationally recognized champion with honors including being one of the youngest illusionists to headline the famed Magic Castle in Hollywood.
Thereafter, his resume would grow to include multiple appearances on the hit TV series “Masters of Illusion”, the youngest illusionist featured in several shows on the Las Vegas strip, tours taking him around the world including France, Italy, Canada, and Greece, he is also the only illusionist to ever be awarded the title of most original magician on FOX’s “World Magic Awards.” Catch this unique, hair rising act, at THE BOX!

My name is Jeff. I was born and bred in Brooklyn, New York. Since 1991, I have lived in South Florida and have eaten in so many restaurants down here, that I now consider myself to be a food expert. END_OF_DOCUMENT_TOKEN_TO_BE_REPLACED