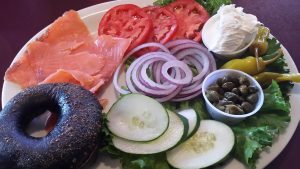 Trust Jeff Eats on this one (hey! this is the third time I’ve mentioned the joint)…

PASTRAMI ON TOASTED RYE (SIDE OF POTATO SALAD)
$9.95 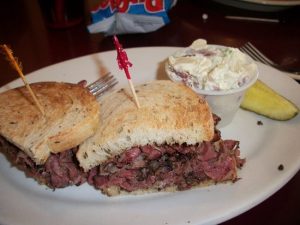 Real easy tale to tell you guys, Goldman’s is one of the best bagel/deli joints in Florida!

I singled out Goldmans’ pastrami on rye for special mention- but trust Jeff Eats when I tell you that- “everything” this joint makes kills! Of course, some “items” kill more than others, but they all kill!

If you’re into bagel/deli joints- Goldmans is an absolute must try! 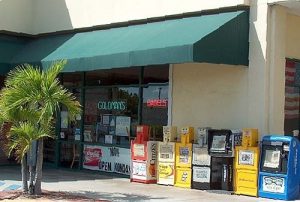 Jeff Eats, Mrs. Jeff Eats and a couple of friends recently did lunch at Goldmans-and I gotta tell you… the pastrami on rye, corned beef on rye, chicken salad on a toasted everything bagel, tuna salad on a toasted whole wheat bagel, potato salad/cole slaw were-real good.

Based on “this” outing…Goldmans has to- rank right up there with the best of South Florida’s bagel/deli joints.

My name is Jeff. I was born and bred in Brooklyn, New York. Since 1991, I have lived in South Florida and have eaten in so many restaurants down here, that I now consider myself to be a food expert. END_OF_DOCUMENT_TOKEN_TO_BE_REPLACED