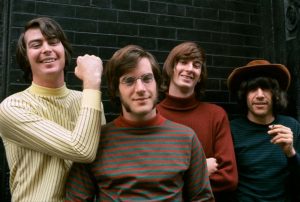 For you guys who maybe wondering, original members Steve Boone and Joe Butler are in the current 5-man Lovin’ Spoonful lineup!

Jeff Eats and Mrs. Jeff Eats saw The Lovin’ Spoonful last year- trust me when I tell you, these guys put on an absolutely great show! 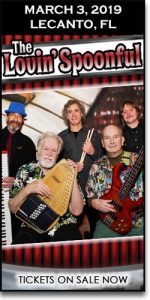 If you remember “Do You Believe in Magic?” and “Did You Ever Have to Make Up Your Mind?”, you’re in the right place. According to the Rock & Roll Hall of Fame, between 1965 and 1968, The Lovin’ Spoonful spanned the genres of jug-band music (“Good Time Music”), ragtime (“Day Dream”), country (“Nashville Cats”), folk-pop (“You Didn’t Have to Be So Nice”), hard rock (“Summer in the City”) and orchestrated pop (“She Is Still a Mystery”). Add to that “6 o’Clock” and “Darling Be Home Soon” and you’ve got the makings of one of the best vintage rock and roll concerts ever. The Spoonful features original founding members Steve Boone (who co-wrote some of the bands biggest hits) and Joe Butler, as well as Murray Weinstock (who played and sang on “Welcome Back”), Mike Arturi and Phil Smith.

Their first 7 single releases all made it into the Top 10 on the record charts. Early non-stop touring including a legendary run with The Supremes gave The Lovin’ Spoonful an audience that most rock bands of the time did not have. Over the next 3 years, 6 original music albums and 12 hit singles followed.

My name is Jeff. I was born and bred in Brooklyn, New York. Since 1991, I have lived in South Florida and have eaten in so many restaurants down here, that I now consider myself to be a food expert. END_OF_DOCUMENT_TOKEN_TO_BE_REPLACED