“The Early Bird Catches The First Worm” (aka- the best seats)…

You can catch- tickets at poprockdoowopp.com… 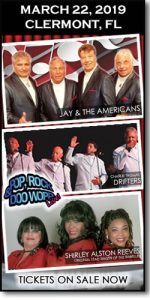 The iconic 60s hit-makers are back at the Clermont PAC by popular demand. With a staggering 18 charted hits and five Top 10 records, few bands ever reached the heights of Jay and the Americans. “This Magic Moment”, “Only in America”, “Cara Mia”, “Come a Little Bit Closer”, “Some Enchanted Evening”, “Let’s Lock the Door”, “Walkin’ in the Rain” and more will be faithfully re-created, accompanied by a live rhythm section and brass section. Jay & the Americans is one of the few artists of the era that still boasts 3 original members!

The Drifters’ seemingly-endless list of hit records include “Under the Boardwalk”, “On Broadway”, “There Goes My Baby”, “Up on the Roof” & “Save the Last Dance for Me”. Accept no imitations! This group features original member Rock & Roll Hall of Fame inductee Charlie Thomas, the longest-tenured member of the group and the only Drifter to have sung on all of the group’s biggest hits. To date,?The Drifters?have sold over 114 million albums and 214 million singles.

Formed in 1957 in Passaic, New Jersey, The Shirelles were one of the first and certainly among the very best of the girl groups of their era. John Lennon proclaimed the Shirelles his favorite group and The Beatles even tipped their hats by covering a couple of the girls’ hits. From 1960 to ‘63, The Shirelles charted a dozen Top 40 singles including the #1s “Will You Love Me Tomorrow” and “Soldier Boy” followed by “Tonight’s the Night”, “Mama Said”, “Everybody Loves a Lover” and “Foolish Little Girl.” In 1996, The Shirelles were inducted into the Rock & Roll Hall of Fame. As you’ll see and hear, Shirley looks and sounds better than ever as she is joined by the talented trio of Iris Lammers, Madeline Morris and musical director Greg WoodS.

My name is Jeff. I was born and bred in Brooklyn, New York. Since 1991, I have lived in South Florida and have eaten in so many restaurants down here, that I now consider myself to be a food expert. END_OF_DOCUMENT_TOKEN_TO_BE_REPLACED