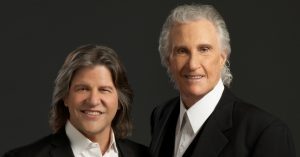 Hey! I know that Bobby Hatfield passed away on November 5, 2003!

* The Righteous Brothers, that original “blue-eyed soul”, are back at Harrah’s Las Vegas. In addition, the group is thrilled to announce that their 2017-2018 schedule has just been released which includes an extended residency inside the beautiful Harrah’s Showroom, beginning February 7, as well as rapidly growing touring schedule!
Join Rock and Roll Hall of Famer, Bill Medley and his new partner Bucky Heard, as they take you on a nostalgic journey through the legendary musical stylings of one of the greatest rock and roll duos of all time.
Book your tickets today for this once in a lifetime experience, featuring timeless classics and endless memories, and get ready to have the “Time of Your Life”!
Rock and Roll Hall of Fame duo The Righteous Brothers topped the charts in four decades. Now, Bill Medley joins forces with one of the most versatile vocalists in America, Bucky Heard, to bring the Righteous Brothers back to the stage.
The Righteous Brothers concert experience features a string of their biggest #1 hits, including You’ve Lost That Lovin’Feelin’( the most played song in radio history), Soul & Inspiration, Unchained Melody, Rock and Roll Heaven, Medley’s Grammy-winning Dirty Dancing theme The Time of My Life, and much, much more!

My name is Jeff. I was born and bred in Brooklyn, New York. Since 1991, I have lived in South Florida and have eaten in so many restaurants down here, that I now consider myself to be a food expert. END_OF_DOCUMENT_TOKEN_TO_BE_REPLACED