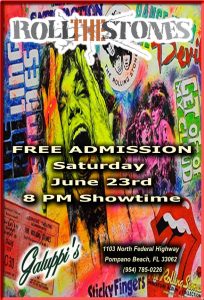 Assuming that the weather cooperates-it’s gonna be a dynamite night of good food, good drink and Rock N Roll!

Galuppi’s is open for lunch and dinner 7 days a week and for brunch on Sunday. According to its website, the joint has all kinds of entertainment and “specials”…so If you want to try Galuppi’s, I would suggest that you “call ahead” to find out “what’s on tap” (pun intended).

My name is Jeff. I was born and bred in Brooklyn, New York. Since 1991, I have lived in South Florida and have eaten in so many restaurants down here, that I now consider myself to be a food expert. END_OF_DOCUMENT_TOKEN_TO_BE_REPLACED