As my late Great Uncle Sam use to say- “Cheap is good, but free is even better.”

With that in mind, I’m kinda thinking that this “free” ticket offer may work for some of you guys! 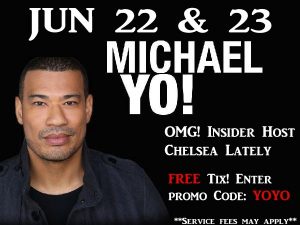 from palmbeachimprov.com
Yo:
Michael Yo is a Stand-up Comedian, Actor, and TV Host known for his work on E!’s Chelsea Lately, is a regular on The Talk, The Wendy Williams Show and The Today Show. This self-proclaimed “Half-Black Brother with a Korean Mother” has also appeared on E! News, Kourtney & Khloe Take Miami and his own show, Yo on E!. Michael is currently a co-host on CBS’s The Insider.

You can also see Michael on Yahoo’s The Yo Show on Yahoo, a show that highlighted Michael’s unique personality and humorous take on celebrities and pop culture. You can catch Michael on the silver screen in Losing Control, Cookout 2 and Sofia Coppola’s Bling Ring. Michael has appeared at numerous comedy clubs across the country including: Improv’s, Stand-Up Live, Palms Hotel, Laugh Factory, Comedy Store, and Comedy Juice among others. His Hot Mess Tour also performs at colleges throughout the country.

My name is Jeff. I was born and bred in Brooklyn, New York. Since 1991, I have lived in South Florida and have eaten in so many restaurants down here, that I now consider myself to be a food expert. END_OF_DOCUMENT_TOKEN_TO_BE_REPLACED