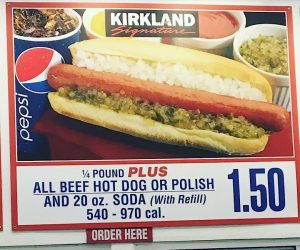 Just between us, I love grilled/broiled hot dogs- I’m not a fan of steamed hot dogs (Costco’s hot dogs and buns are steamed)…

That said, I can’t recall the last time I was in a Costco when I didn’t go for the buck-fifty!

Your thoughts on Costco’s $1.50 Hot Dog Deal would be much appreciated.

My name is Jeff. I was born and bred in Brooklyn, New York. Since 1991, I have lived in South Florida and have eaten in so many restaurants down here, that I now consider myself to be a food expert. END_OF_DOCUMENT_TOKEN_TO_BE_REPLACED