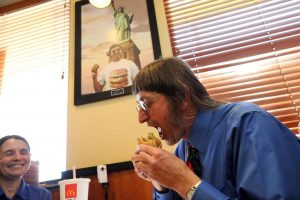 A Wisconsin man who already holds the Guinness World Record for eating the most Big Macs just chowed down on his 30,000th combo of two all-beef patties, special sauce, lettuce, cheese, pickles, onions on a sesame seed bun.

Don Gorske, 64, told The Post on Sunday that he has been eating two McDonald’s Big Macs every day for the past 46 years – and the only thing he wants to do in retirement is shove even more of them into his mouth.

Gorske – famously featured in the 2004 documentary “Super Size Me” because of his obsession with the 563-calorie, fat-laden sandwiches – insisted that his health is great.

He says he purchases six Big Macs on Monday, eats two on the spot and puts the rest in the refrigerator at home.

“I don’t freeze them, I just put them in the fridge and take them out when I want one. I microwave them, I like them like that,” Gorske said.

On Thursday, he buys eight and goes through the process again.

Gorske said he does not get any special incentives from McDonald’s and pays the same price for his burgers as everyone else.

“I don’t feel they owe me anything,” he said, adding that the owner of his local franchise is a “super nice guy trying to make a living.”

He said the burgers make up about 90 percent of his diet.

He also consumes at least one McDonald’s Fruit N’ Yogurt parfait a day.

“My wife was at me to eat more fruits and vegetables, and the parfaits at my local store are only $1,” he said.

Gorske said he “can’t remember” the last time he ate an apple or a banana.

Over the past 44 years, Gorske has only gone eight days in total without consuming a Big Mac.

And on those days, it was because he had to do double shifts at his former job at Waupon Prison and couldn’t get out the door.

“You can’t take Big Macs in front of the inmates,” he said.

Gorske, who has thousands of Big Mac cartons in his home, said several people have suggested he suffers from a form of Obsessive Compulsive Disorder.

My name is Jeff. I was born and bred in Brooklyn, New York. Since 1991, I have lived in South Florida and have eaten in so many restaurants down here, that I now consider myself to be a food expert. END_OF_DOCUMENT_TOKEN_TO_BE_REPLACED