This article first appeared on 1/6/18. I just checked the the Arts Garage box-office (artsgarage.org) and there are a small handful of tickets left for Otis Cadillac’s April 14, 2018 (8pm) show. So if you wanna see- one of the coolest Roots Rock N Roll bands in America (and don’t yet have tickets) it is definitely time to make your move on the ticket front. Jeff Eats, Mrs. Jeff Eats and our LaSpada’s subs (pardon me- hoagies!) will be there! 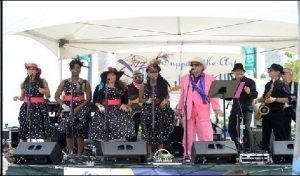 If you guys are wondering where Jeff Eats and Mrs. Jeff Eats will be on Saturday- April 14th, 2018 from 8pm-10pm…well wonder no more!

Trust Jeff Eats on this one, the Arts Garage crowd is gonna have a non stop-fast paced blast the moment the “legendary” Otis Cadillac -takes to the stage!

If you need some convincing as to how good Otis Cadillac and the El Dorados Featuring the Sublime Seville Sisters really are-otiscadillacband.com and You Tube!

You can purchase tickets online at artsgarage.org. 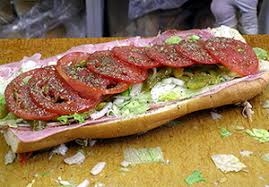 By the way, the reason for the early heads-up on this “one”- the last time (8/18/17) Otis Cadillac and the Eldorados Featuring the Sublime Seville Sisters played the Arts Garage- it was a SRO affair without a single empty seat in the joint… 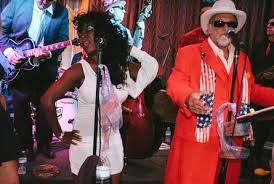 The Otis Cadillac and El Dorados R&B Revue is an 11 piece band that performs Classic R&B, Root Rock N’ Roll and related Blues oriented material. The band performs in a style that emulates the R&B revues of the late 50s and early 60s. It is the goal of each performance to recreate the atmosphere and energy that gave birth to Rock N’ Roll in that era. The band chooses eclectic and diverse material exposing the talents of its band members.

Don’t look for an overly familiar and nostalgic performance from this group. The seasoned veteran musicians that compose the El Dorados roar through the music and spur Otis and the Sevilles to inspired, soulful, performances that are stirring, fresh, fun and guaranteed to get the most jaded bun off its seat.

“Otis Cadillac and the Eldorados featuring the Sublime Seville Sisters drove the crowd wild for two 75 minute sets. The partying was in full swing and it was certainly one of the top 3 days I’ve ever had at Earl’s. I don’t quite know if touring is in their plans, but if this show ever goes on the road keep your fingers crossed that it’s on a road near you.“

My name is Jeff. I was born and bred in Brooklyn, New York. Since 1991, I have lived in South Florida and have eaten in so many restaurants down here, that I now consider myself to be a food expert. END_OF_DOCUMENT_TOKEN_TO_BE_REPLACED