Peter Fogel’s ‘TIL DEATH DO US PART… YOU FIRST! Comes To Stonzek Theatre in Lake Worth

* Peter Fogel’s ‘TIL DEATH DO US PART… YOU FIRST! Comes To Stonzek Theatre in Lake Worth.

Jeff Eats and Mrs. Jeff Eats have seen the show twice- and I’m telling you guys that it’s an absolutely hilarious outing! Don’t miss it! 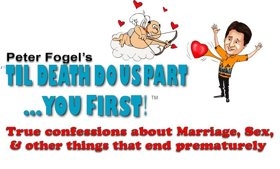 ‘TIL DEATH DO US PART… YOU FIRST! Comes To Stonzek Theatre in Lake Worth

‘TIL DEATH DO US PART… YOU FIRST! Comes To Stonzek Theatre in Lake Worth

The Stonzek Theatre at the Lake Worth Playhouse is pleased to announce the perfect post Valentine’s celebration with a 2 day engagement of: ‘TIL DEATH DO US PART…YOU FIRST!, True confessions about Sex, Marriage & other things that end prematurely… written and performed by Peter J. Fogel, March 23-24th 2018 beginning 8 PM.

Eternal bachelor Peter Fogel has MAJOR commitment issues. He also senses his own mortality and after much soul searching decides to revisit the scene of all his romantic disasters. And with that decision he brings you his auto-biographical tale of a comedian’s Quixote Quest to finally searching for the one woman who can transform his life – with his hysterical multi-media solo show.

It’s the holidays and Fogel is looking forward to a romantic evening with his girlfriend. Instead she dumps him. Distraught and confused, he is visited by a Special Visitor who mentors him on how he continually screws up his own love life. From the trials and tribulations of marriage… to on-line dating… to “studying for his prostate exam…” Fogel mixes his signature wit, along with riotous relatable characters. If you’ve ever been single, married, or divorced (and that’s everyone), you will certainly relate as our hapless Lothario takes us on a whirlwind comedic journey of searching, finding… and eventually surrendering to his Soul Mate!

‘TIL DEATH DO US PART… YOU FIRST! Comes To Stonzek Theatre in Lake WorthPeter J. Fogel is an award-winning comedian, actor, and playwright who has performed in the United States, Canada and Australia for over 25 years. In addition to writing and performing TIL DEATH DO US PART…YOU FIRST!, Peter is presently the National Touring Star of Steve Solomon’s hit solo show My Mother’s Italian, My Father’s Jewish & I’m In Therapy! Peter is also a motivational speaker, copywriter, and author of five books – that include Reboot Your Career: 27 Ways to Reinvent Yourself in The Workplace (If You Still Have a Job). Over the decades, Peter has either worked or appeared on over twenty-two television programs such as Comic Strip Live, Comedy on the Road, Married With Children, Unhappily Ever After, Chicago Sons (Jason Bateman) and Men Behaving Badly! (Rob Schneider). Other network appearances include HBO, NBC MTV, PBS and A& E.

Stonzek Theatre at The Lake Worth Playhouse 713 Lake Ave, Lake Worth FL 33460

For reservations, please contact the Box Office at 561-296-9382 or visit https://www.brownpapertickets.com/event/3334734 Seating is Limited!

My name is Jeff. I was born and bred in Brooklyn, New York. Since 1991, I have lived in South Florida and have eaten in so many restaurants down here, that I now consider myself to be a food expert. END_OF_DOCUMENT_TOKEN_TO_BE_REPLACED