Literally- just got this flyer via e-mail… 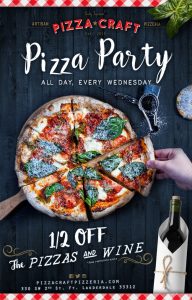 Jeff Eats is gonna pass on the “offer.”

Maybe one of you guys wants to checkout Pizzacraft and see how the joint is doing some 27 months since Jeff Eats’ first/only/last visit back on 11/23/15?

There is an old Polish saying or maybe it’s an old Latvian saying…”If you don’t have something nice to say, don’t say anything.”

With the above in mind, yesterday Jeff Eats and Mrs. Jeff Eats ate lunch at Pizzacraft Artisian Pizzeria- basic cheese pizza pie, meatball sub, ricotta appetizer and…since I am neither Polish nor Latvian, lousy way-overpriced crap!- the $18 6-slice pizza was under-cooked (the cheese was room temperature) and the dough was topped with a puddle (trust Jeff Eats, “puddle” is being kind) of “who knows what reddish/yellow liquid”- the $14 meatball sub tasted like/and had the same consistency as the Sloppy Joes that P.S. 179’s cafeteria use to serve for lunch in 1957 (trust Jeff Eats, in 1957 nobody lined-up for seconds on those Sloppy Joes) and the $9 ricotta appetizer had no taste-whatsoever!

To be perfectly honest with you, after paying the $56- bill (tax and tip included) I felt like an absolute schmuck for having chosen this joint to eat at. What a freaking rip-off!

Now you guys and Jeff Eats both know that food “reviewing” is a subjective game…what I may like, you on the other hand may hate -and vice versa…with that in mind, printed down below is Pizzacraft’s description of itself… 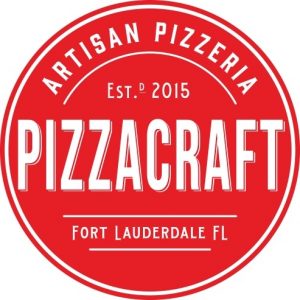 Pizzacraft is your neighborhood pizzeria and cocktail bar. Pizzas are the star of the show at Pizzacraft. Wood burning masterpieces that feature “00” flour, imported tomatoes, homemade mozzarella and local and seasonal produce. The menu also features homemade pastas, weekly Italian specialties, seasonal salads and a wide selection of local and imported charcuterie and cheeses from the world’s best artisans.

Pizzacraft also features a full liquor bar, Italian sodas, tons of local craft beers and has a wine list that boasts new and old world favorites. Open 7 days a week Pizzacraft is the perfect for a lunch, dinner or late night rendezvous.

My name is Jeff. I was born and bred in Brooklyn, New York. Since 1991, I have lived in South Florida and have eaten in so many restaurants down here, that I now consider myself to be a food expert. END_OF_DOCUMENT_TOKEN_TO_BE_REPLACED