McDonald’s Next Conquest: Taking Over The Chicken Game

* McDonald’s Next Conquest: Taking Over The Chicken game.

Down below an interesting (well, Jeff Eats thought it was interesting) article that I read this morning at qsrmagazine.com about McDonald’s and its expansion plans in- chicken! 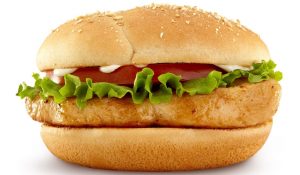 McDonald’s Next Conquest: Taking Over The Chicken Game

Can the fast-food giant really compete with Chick-fil-A in this field?

Conquest: Taking Over the Chicken Game

Can the fast-food giant really compete with Chick-fil-A in this field?

MCDONALD’S
McDonald’s has taken steps to improve its chicken across the menu in recent years.
For years, McDonald’s has ridden its iconic “I’m Lovin It,” slogan, all the way to the top of the fast food chain. Now, the brand is hoping fans of the Golden Arches have another thought as they gobble down their value meals—“tastes like chicken.”

According to internal documents reviewed by Bloomberg News, the top earner in quick service is ramping up its effort to become a “credible chicken player,” with its latest project, entitled “Better Chicken.” The chain outlined the plan in a letter to franchisees, a group operating about 90 percent of McDonald’s U.S. locations.

READ MORE: McDonald’s to invest billions in 2018. Here’s why.

The focus on an expanded menu is nothing new for McDonald’s. While still boasting about the billions and billions of patties flipped, the brand has expanded its McCafe products in recent years, added higher quality specialty sandwiches and salads, and, yes, plenty more chicken.

The classic McChicken has been joined and abandoned in recent years by the Buttermilk Crispy Chicken sandwiches, Snack Wraps, and most recently, the new and improved Classic Chicken Sandwich, part of the recently launched $1 2 3 Dollar Menu, and the restaurant’s Buttermilk Chicken Tenders, which sold so well that many locations had to take them off the menu temporarily to restock.

To the Hamburglar’s credit, the numbers are clear: Americans are eating more and more chicken. According to the U.S. Department of Agriculture, the average American ate nearly 92 pounds of chicken last year, almost as much as the combined total for beef (56.6 pounds) and pork (51 pounds). In fact, because demand continues to exceed supply, the entire quick-service industry has been faced with rising poultry prices.

The goal is for McDonald’s to continue its recent hot streak by riding the chicken wave. McDonald’s had a strong fourth quarter in 2017, capping the fiscal year with global comparative sales up 5.5 percent from the year prior. System-wide sales jumped 8 percent in constant currencies, and consolidated operating income increased 6 percent. That quarter was on pace with the rest of the year—overall, same-store sales were up 5.3 percent in 2017.

But franchisees aren’t being told to focus on chicken simply because it’s perceived to be healthier than beef, or because tenders, strips, breasts, and wings are selling like hotcakes. In the quick-service arena, as far as chicken is concerned, there’s a lot of territory left to be claimed.

One not-so-secret facet of McDonald’s chicken strategy is the desire to bump up against Chick-fil-A, the leading chicken concept on QSR’s 50 at No. 8 (McDonald’s, of course, tops the list by a sizable amount). However, by average unit volume, Chick-fil-A is far and away the most lucrative chain. McDonald’s reported average sales per restaurant of $2.5 million in 2016. Chick-fil-A was $4.4 million, despite being closed on Sundays, of course.

Chick-fil-A remains a standard-bearer across several categories thanks to its penchant for outstanding customer service, tidy stores, and efficient operations. In the 2017 Temkin Experience Ratings, a survey based on 10,000 customer responses, Chick-fil-A earned an 83 percent score to top the entire industry. In QSR’s 2016 Drive-Thru study, Chick-fil-A flexed its customer service muscle yet again. Employee service attributes, from smiling and saying “please” and “thank you” to making eye contact and having an overall pleasant demeanor, were sky-high at Chick-fil-A and cumulatively far ahead of the rest of the pack.

This is reflected in sales performance, as referenced above. Despite KFC having nearly double as many locations, it generated $4.5 billion in 2016 system-wide sales compared to Chick-fil-A’s $7.8 billion from just 2,102 units.

Of course, nobody can quite compete with McDonald’s sheer volume and sales performance, which makes the cause of its appetite for chicken that much clearer.

So for McDonald’s, growth is accounted for. Its customer base is already established, its stakes claimed across the world. Now, the challenge is offering a product that will have chicken enthusiasts going to the Golden Arches as their first choice.

But that’s no small feat. For years, McNuggets was derided as a lesser form of chicken. It has taken steps in recent years to remedy that perception, including removing artificial preservatives from nuggets, and said it would stop serving chicken with antibiotics across its menu. Despite the health halo many perceive around chicken, McDonald’s still doesn’t hit that note with some consumers. A large part of their strategy is changing that entirely.

If the success of Buttermilk Chicken Tenders, which played a role in last quarter’s push, is any indication of the brand’s fortunes in the arena of chicken, they’re going to be just fine. And sometimes, when you’re as big as Ronald McDonald, it’s tough to fail.

2 Comments to “McDonald’s Next Conquest: Taking Over The Chicken Game”

My name is Jeff. I was born and bred in Brooklyn, New York. Since 1991, I have lived in South Florida and have eaten in so many restaurants down here, that I now consider myself to be a food expert. END_OF_DOCUMENT_TOKEN_TO_BE_REPLACED