This article first appeared on 1/24/18. Jeff Eats just checked the Boca Black Box- Box Office (bocablackbox.com) and goldstar.com (discount tickets) and there are a handful of really good seats left for- tonight’s (Saturday, 2/3/18-8pm) show! Trust me on this one, you guys gotta see Freddy Rubino’s stand-up act! Rubino is absolutely terrific! By the way, the Boca Black Box a couple of days ago announced that legendary Comedian Jackie Mason’s Daughter, Sheba Mason who’s a very funny lady- will open for Rubino- and a “spend a minimum of $20 and get a free ticket” promotion- so if you’re gonna go- check with the Boca Black Box – Box Office (561) 473-9036 and see how-that promotion works! 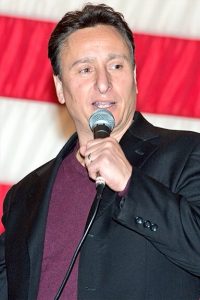 The Boca Black Box just announced that national touring headliner comedian Freddy Rubino is in for 1-show on Saturday, 2/3/18 (8pm)!

Trust Jeff Eats when I tell you that the “very light blue” Rubino is one one of the funniest stand-up acts currently working America’s comedy club/casino/event circuit!

I am telling you guys- that Rubino will crack you up all night!

Freddy Rubino was born on the lower east side of Manhattan in New York City and then moved to Brooklyn. It is here where Fred developed, at an early age, the basis for his comedy material and the humor and hilarity of growing up Italian and in Brooklyn! In 2005 Fred became a published author with the release of his conspiracy driven book Nazi Princess: The Final Deception which actually isn’t funny at all!!! Three years later, Fred turned his interest to writing and performing stand-up comedy.
Opening up for comics such as Nick Dipaolo and Vic Dibitetto, Fred quickly became the featured comic everyone wanted to use! He has also appeared on Radio Opie and Anthony’s top ten funniest listeners radio show, recently had his performance broadcast live on the internet via Action Audio and has made many appearances on local cable talk shows where he has performed his hilarious stand-up. Fred has now successfully transitioned from Featured Comic to Star and Headlining Comedian.

My name is Jeff. I was born and bred in Brooklyn, New York. Since 1991, I have lived in South Florida and have eaten in so many restaurants down here, that I now consider myself to be a food expert. END_OF_DOCUMENT_TOKEN_TO_BE_REPLACED