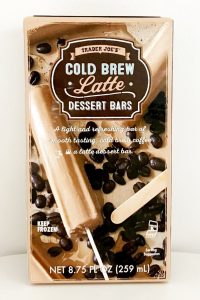 Finally, the term “Bars” is kinda deceiving- because anyone over the age of 4 months knows that these Bars are really “Pops”- any way, if you don’t believe Jeff Eats’ call here, traderjoes.com for store locations! 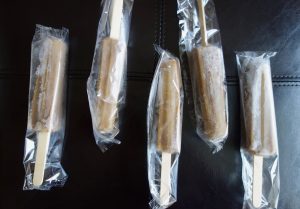 In ancient Rome, crushed ice was blended with fresh fruit and spices. China’s Yuan dynasty and the American founding fathers enjoyed the cool, refreshing flavors of sorbet. Long before there was electric refrigeration (or freezing, for that matter), there were sweet frozen treats to be savored.

In the early years of the 20th century, a happy accident and the entrepreneurial spirit of an 11-year-old boy led to extensive enjoyment of frozen desserts on a stick, and by the mid-20th century, when household freezers became widespread, children across the country were in love with their portable frozen delights.

But frozen treats on sticks are not just for children, right? There are icy treats made with adults in mind, aren’t there? Of course there are.

In 2017, when we’re nearly 20% of the way through the 21st century, Trader Joe’s is thrilled to introduce Trader Joe’s Cold Brew Latte Dessert Bars, the most delicious extension of modern American coffee culture we’ve tasted in a good, long time.

Crafted with an adult’s taste buds in mind, coffee takes center stage – cold brew coffee is the first ingredient, and the robust flavors of that coffee make a rich first impression. The coffee is blended with ingredients you’d find in the best ice cream – things like cream, milk, and sugar – and meticulously mixed so that you taste coffee, then cream, then a sweet-but-not-too-sweet finish. It’s like a well-crafted latte from your neighborhood coffee house. Frozen. On a stick.

My name is Jeff. I was born and bred in Brooklyn, New York. Since 1991, I have lived in South Florida and have eaten in so many restaurants down here, that I now consider myself to be a food expert. END_OF_DOCUMENT_TOKEN_TO_BE_REPLACED