This story first appeared on 12/31/17. Jeff Eats just checked the Boca Black Box Box-Office and goldstar.com (discount tickets) and there are a handful of really good seats left for tonight’s (8pm) show. Trust me on this one, this guy Norris’ stand-up act is off the chart funny! You guys don’t want to miss him! 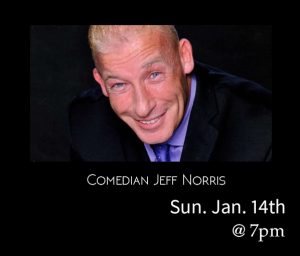 Jeff Norris, one of America’s funniest “clean” national touring headliner- comedians is scheduled to appear at the Boca Black Box- on Sunday, January 14th, 2018 at 8pm.

Trust me on this one, Norris will have you pissing your pants-from laughter!

from bocablackbox.com
Jeff Norris is an energetic whirlwind of comedy. He is a crowd favorite in both Atlantic City and Las Vegas. He has also most recently partnered with Royal Caribbean Cruise Lines.

Over the years, Jeff has appeared on numerous tv and film roles including HBO’s Boardwalk Empire and OZ, Good Morning America, My Super-Ex Girlfriend and Not Fade Away.

Jeff is one of the most quick-witted acts working today–hardly pausing for a breath as he tears through his act, keeping the audience alert and in stitches from begining to end. Jeff has been called a complete pro–one of the few reminaing comics that understands the importance of showmanship and presentation.

My name is Jeff. I was born and bred in Brooklyn, New York. Since 1991, I have lived in South Florida and have eaten in so many restaurants down here, that I now consider myself to be a food expert. END_OF_DOCUMENT_TOKEN_TO_BE_REPLACED