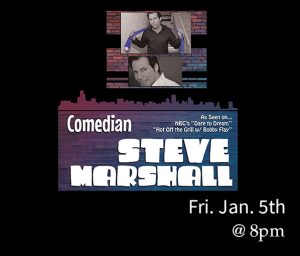 Hilarious, insightful and brilliant “medium blue” material about growing up Jewish in Brooklyn -and coping with everyday life in general!

Marshall, the national touring headliner comedian is in for 1-show, Friday, January 5th, 2018 (8pm) at the Boca Black Box in Boca Raton!

If you haven’t yet seen Steve Marshall, Go!- you’ll love the guy!

New York-based national headlining comedian Steve Marshall plays all the big clubs across the country, and now he’s making a stop at The Boca Black Box. He’s been featured on national television platforms such as CBS News and CNBC, plus Hot Off the Grill With Bobby Flay and NBC’s Dare to Dream. Riffing relentlessly on topics such as his negative Jewish family and why one should never make fun of Chinese people who work in a Chinese restaurant, Marshall’s no-holds-barred approach will have you laughing and gasping in equal doses.

My name is Jeff. I was born and bred in Brooklyn, New York. Since 1991, I have lived in South Florida and have eaten in so many restaurants down here, that I now consider myself to be a food expert. END_OF_DOCUMENT_TOKEN_TO_BE_REPLACED