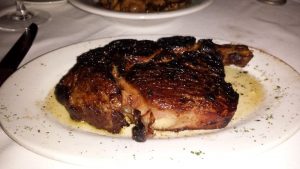 Jeff Eats got a $150 New York Prime Gift Card to give to one of you guys! 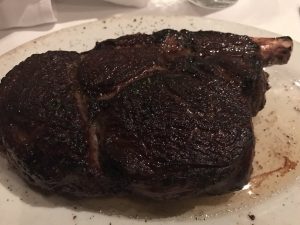 Every so often, you gotta go for the cash- and eat at an upscale-pricey joint! Just make sure that the food and service are dynamite!

By the way, if the steak doesn’t work for you- maybe the $48 16oz Double Rib Veal Chop or the $14 Oysters Rockefeller will! 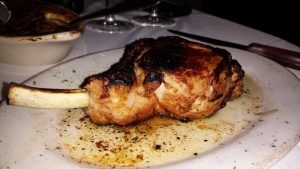 New York Prime (Boca Raton)
Posted on July 23rd, 2008 · American Boca Raton Seafood
New York Prime, 2350 NW Executive Center, Boca Raton, Florida 33431 (561) 998-3881.
This evening I ate dinner at New York Prime an upscale steakhouse…you know exactly what this kind of joint is all about…where a 22 oz. bone-in-ribeye goes for $42…where a baked potato goes for $7.50. Personally, if I closed my eyes and just ate, I couldn’t tell you if I was in New York Prime, Abe & Louie’s, Chops, Morton’s, Ruth’s Chris… as they all play the same tune, give or take a different “note” here and there. As for tonight’s food, it was okay, nothing great…the steak was very fatty…the hash browns bland, your neighborhood bagel-deli makes better ones and doesn’t charge $11…the onion rings and sauteed onions sides were good, but pricey at $8 and $11 respectively.

My name is Jeff. I was born and bred in Brooklyn, New York. Since 1991, I have lived in South Florida and have eaten in so many restaurants down here, that I now consider myself to be a food expert. END_OF_DOCUMENT_TOKEN_TO_BE_REPLACED