Inside the Rise of Eatertainment Dining 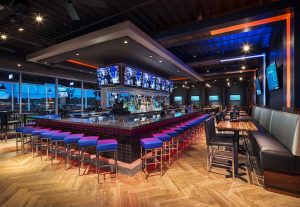 * Inside the Rise of Eatertainment Dining.

In a nutshell, it talks about the growing restaurant segment- the combining of food and entertainment under one-roof!

Now unless you’ve lived on Planet- Mars for the past 40 years, you know what joints like Chuck E. Cheese’s and Dave & Busters are all about…well, the QSR article discusses the next-generation of what QSR calls the Eatertainment Dining industry!

By the way, the article briefly mentions an operation named Topgolf (topgolf.com)-which for our Florida purposes currently has locations in Orlando, Tampa and Jacksonville- with Miami Gardens and Doral locations in development. Jeff Eats got plans to checkout Topgolf sometime in 2018! Take a look at topgolf.com- this “concept” looks to be off the chart amazing! 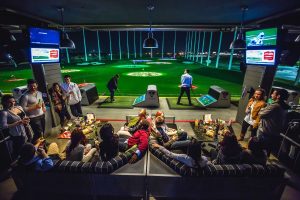 Inside the Rise of Eatertainment Dining

As the eatertainment trend continues to take hold, brands are placing a greater emphasis on food and beverage to capture customer interest.

A lot can be, and has been, said about modern-day consumers: They crave experiences rather than goods; their tastes are increasingly sophisticated; they’re seeking quality, value, and, above all, convenience. In short, they want it all.

And when it comes to food and entertainment, it looks like they’re getting exactly what they’ve asked for thanks to the rise of the “eatertainment” industry.

The concepts in this space go beyond just mini golf or movie theaters with concession-stand snacks. Instead, they’re a mashup of high-quality food, beverage, and entertainment—a one-stop shop where experience-seeking consumers can go for premium meals, fun activities, and the chance to connect socially with friends and family.

“It’s part of a bigger trend where people want to go out and have an evening and an experience at one place—dinner, drinks, and games all under one roof,” says Paul Kermizian, CEO of Brooklyn, New York–based Barcade, one of the original arcade bars.

Though growing rapidly, the eatertainment segment isn’t necessarily new. Its true beginnings came with arcade and gaming concepts like Chuck E. Cheese’s and Dave & Buster’s in the late ’70s. Over the last handful of years, however, new concepts have popped up and taken eatertainment to the next level in hopes of meeting millennials’ demands for a more elevated experience.

“Millennials really seek out and consume experiences,” says Robert Thompson, CEO of Punch Bowl Social, a “social emporium” featuring everything from arcade games and ping-pong to bocce ball and bowling. “When the largest buying segment speaks, most of the consumer-facing retail world listens.”

Mike Kostyo, senior publications manager at Datassential, says the industry’s growth has also been driven by the social media era—“Everybody wants to go out and have an experience that they can share with their friends,” he says—as well as increasing competition within the restaurant industry. “If you’re a restaurant operator, you have to go above and beyond these days in order to get people out of their houses and create an experience that makes it a destination,” he adds.

This level of competition is just one of the reasons why today’s eatertainment establishments are making sure they’re worlds away from the concepts of old, particularly when it comes to food and beverage. “The things they’re doing food-wise, it’s not just pizza; it’s not just burgers,” Kostyo says. “In some of the places, they’re partnering with great chefs, and they’re actually doing some really awesome things.”

Punch Bowl isn’t the only eatertainment venue working to erase guests’ experience with the concession-style dining of old. Though they dish “upscale bar cuisine” like burgers, flatbreads, nachos, and other Tex-Mex–inspired dishes, the Topgolf culinary team strives to exceed guests’ expectations about what kind of food the concept serves, says Seve Delgado, national director of culinary operations for the golf-themed eatertainment venue.

“They’re wowed by the fact that it wasn’t what they expected,” she says. “They look at us as an entertainment facility, but as they come more often, they learn that we’re so much more.”

A few of its standout items include the Brisket Grilled Cheese and the G.O.A.T. (Greatest of All Time), the latter of which is made with caramelized French toast and chicken breast marinated in jalapeño pickle brine. It’s then dredged in a Cap’n Crunch

breading and topped with jalapeño gravy, an over-easy egg, and bacon crumbles. “It’s a wow factor, but it’s one of those familiar favorites with a twist,” Delgado says.

Though Topgolf and its guests still see the brand primarily as an entertainment facility with food as an added bonus, the opposite is true for Denver-based Ace Eat Serve, a ping-pong hall serving Asian street food. “First and foremost, it’s a restaurant,” says owner Josh Wolkon. “The pong is a secondary part of the concept, and the event space it allows for is secondary.”

To reinforce its emphasis on the culinary side of the business, Ace Eat Serve recently hired a classically trained chef from Vietnam who’s responsible for overseeing the concept’s small-plates menu of items like bao buns, dumplings, ramen, and Asian-style chicken wings. Wolkon estimates that 60 percent of customers come to Ace Eat Serve for its food and beverages, with only 10 percent of its weekly revenue stemming from ping-pong.

While concepts like Punch Bowl Social, Topgolf, and Ace Eat Serve take pride in their in-house culinary programs, a number of eatertainment establishments look to outside vendors—such as food trucks—to fulfill that part of the equation. After launching their shuffleboard concept four years ago in Brooklyn, Royal Palms Shuffleboard owners Ashley Albert and Jonathan Schnapp needed a way to subsidize the costs of operating their club. However, because they had zero hospitality experience—and no desire to create their own culinary program—the duo built a fireproof room as part of its 17,000-square-foot space, where a rotating lineup of food trucks can drive inside the building and serve guests handheld food like lobster rolls and tacos.

“The key with the food trucks is that we have to find ones that are delicious, of course, but are also reliable and fast,” Albert says. “Because on a Saturday night, you’ve got a couple of thousand people coming through, and you need to get their grilled cheese in and out really fast.”

The concept also has a “surprisingly legit” bar program, she adds, where it uses house-made syrups and fruit purées to whip up a menu of vacation-inspired drinks named after shuffleboard legends.

Beverages are also a big draw at Barcade’s seven locations, where the brand publishes a new tap list every day and often hosts brewery-sponsored events. “We get a lot of regulars that are looking for rare beers that we pour,” Kermizian says. “So we have two circles of regulars: beer-focused ones and game-focused ones. Our best customers are the ones who cross into both of those worlds.”

While the concept’s vintage video and arcade games are top priority for Barcade, Kermizian says he does want food to be part of guests’ experience. After building three locations without a culinary component, the brand began installing full kitchens in its fourth location and beyond, serving items like burgers, wings, and a fried chicken-and-waffle sandwich.

Similar to Barcade’s decision to add food after the brand’s launch, some fast-casual concepts are adding entertainment elements to their already-established eateries. West Coast brand Mendocino Farms, for example, has installed everything from chalkboard walls and foosball tables to mini cornhole courts in the majority of its restaurants.

On average, the brand allots 300 square feet in each of its roughly 3,000-square-foot restaurants to entertainment elements, says cofounder Mario Del Pero. “You’re talking 10 percent of the total restaurant,” he says. “The dining room is probably only on average 2,000 square feet, so we’re giving a good swatch of space for these fun play areas.”

But these size constraints are exactly why Wolkon says adding entertainment spaces to pre-established concepts can be a challenge. “I think people do appreciate having some other form of entertainment included, but to go adding pool tables or bowling alleys or ping-pong tables, it’s real estate driven,” he says. “The ability to take up what would normally be a cash-flowing dining table or replacing six dining tables with a ping-pong table means you better have space somewhere to do that.”

Del Pero doesn’t buy that argument, though. “Plenty of people continue to use that old restaurant paradigm of, ‘Wow, you could be using that space for tables. Is that really a good allocation of space?’ And the argument back is that families really have embraced it,” he says.

“It’s so easy to not leave your house, fire up ‘Game of Thrones’ on your time schedule, call one of your new delivery services to deliver from anywhere in town, and never have to get up and go out,” Wolkon says.

There’s also no concern about saturation in the eatertainment space, primarily because the size of the operations alone are a massive barrier to entry. “Our dining is 60,000 square feet, three or four levels—depending on where you are—so that’s a pretty big challenge,” Delgado says. “We’ve got these rock-star food runners who get the food out of the kitchen for us and hike it up the stairs and drop it off at the table as quickly as possible. We call them our track team.”

But even for smaller concepts like Ace Eat Serve, operating a dining and entertainment space simultaneously presents a number of difficulties. Because it not only offers food and ping pong but also banquet service for corporate events and private parties, Wolkon says, Ace Eat Serve’s kitchen is often under an intense amount of pressure.

“Our most challenging nights are the nights where we do a corporate event in the ping-pong room of 200 people, and then we still have a full dining room and a full patio,” he says. “You’re trying to handle the potential of 400 or 500 people all at the same time and still hold onto the quality of that food.” And since these high-energy establishments typically feature guests flitting about between the dining room and entertainment areas, tracking down customers is a challenge in and of itself, Wolkon says.

Still, operators only expect eatertainment to thrive. “The idea of adding more elements to what it means to go out at night,” Royal Palms’s Albert says, “that’s only going to become a more desirable feature of the hospitality industry.”

My name is Jeff. I was born and bred in Brooklyn, New York. Since 1991, I have lived in South Florida and have eaten in so many restaurants down here, that I now consider myself to be a food expert. END_OF_DOCUMENT_TOKEN_TO_BE_REPLACED