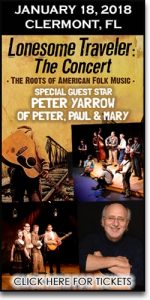 * Lonesome Traveler: The Concert- The Roots Of American Folk Music.

You guys can buy tickets…

Definitely gonna be a SRO situation! 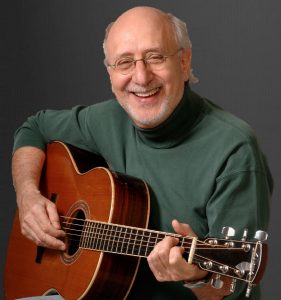 Lonesome Traveler: The Concert- The Roots Of American Folk Music

Charismatic young singers and multi-instrumentalists return us to a time when music brought us together – when it changed us. Complete with period costumes, this unforgettable concert event features romantic duets, patriotic songs, church hymns, union anthems and songs of protest, taking us from the 1920s to the 1960s and beyond– from the front porches of Appalachia to the nightclubs of San Francisco and New York – from the festival stages of Newport to the sound stages of Los Angeles. Songs like: “If I Had a Hammer,“ “Puff The Magic Dragon,” “This Land is Your Land,” “This Little Light of Mine,” “Blowin in the Wind”, “Like a Rolling Stones”, “Turn, Turn Turn”, “American Pie”, and “Hallelujah”.

Folk legend Peter Yarrow of Peter, Paul & Mary has enthusiastically endorsed the show and will be appearing in this production of the show as a special guest star.

An inspiring evening of great music, Lonesome Traveler: The Concert makes its Central Florida debut, presenting a revealing perspective of the roots forever embedded in our culture and bringing together audiences of all ages.

My name is Jeff. I was born and bred in Brooklyn, New York. Since 1991, I have lived in South Florida and have eaten in so many restaurants down here, that I now consider myself to be a food expert. END_OF_DOCUMENT_TOKEN_TO_BE_REPLACED