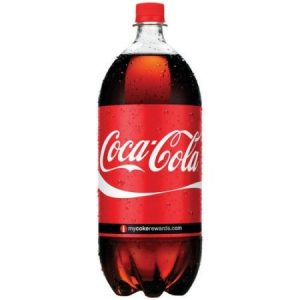 Jeff Eats literally just “stole” this 2 liter bottle of Coca Cola for a buck at the Walmart Supercenter, 16205 South Military Trail, Delray Beach, Florida 33484- betcha a buck you didn’t know that…
______________
according to businessinsider.com

There aren’t many things more refreshing than a cold glass of Coke on a hot day.

But the famous soda, which dates all the way back to 1886, has so many more uses than that.

From getting rid of rust to keeping grass lush and green, a little bit of Coca-Cola can go a long way. Plus, it makes a mean BBQ sauce.

And even though Coke can clean your toilet or polish the chrome of your car’s bumper, it’s still safe to drink. The carbonic acid which makes this soda so good at cleaning is still way less acidic than your stomach acids or even a lemon, according to LIVESTRONG, meaning Coke won’t have the same effect on your stomach lining as it has on a dirty coin.

Keep reading to see the 43 things you can do with a can of Coke.

Putting coins into a glass of Coca-Cola can make them look shiny and new.iambents/Flickr

Clean coins: If your coins look dull and you want to spruce them up, drop your money into a glass of Coke. Wait for a full day or overnight before pulling your coins out. Wipe with a rag and buff the coins — most of the grime will have come away.

Clean toilet: Diet Coke is better than most chemical cleaners. Pour it around the rim and let it flow into the bowl. Let it sit for about an hour and then scrub off any stubborn stains with a toilet brush. Flush once you’re done.

Remove stains from clothes: If you get grease stains on your clothes, you can break up the stain with a can of Coke. Just pour the soda in with your regular normal cycle and detergent to combat the stain.

Remove blood stains: While the rumor that police use soda to get blood stains off highways is a myth, Coca-Cola is really effective at busting through blood stains — the show “MythBusters” even confirmed that this was possible.

Polish chrome: Whether it’s for your car’s bumper or another chrome surface, aluminum foil dipped in Coca-Cola will remove rust much better than any traditional polisher.

Clean burned pots: You can “unstick” burnt pots and pans by pouring in some Coke and bringing it to a boil. Take the pan off the heat and carefully use a scrubbing brush to stir the soda — the food should come right off.

Get rid of rust: If you have any rust stains or tools covered in rust, Coca-Cola will eat away at the rust for you. Leave the rusty object submerged in Coke for an hour or overnight and then scrub off the rust.

Descale a teapot: Filling a kettle with Coke and letting it sit overnight will dissolve any scale hiding inside. You can then thoroughly scrub with a sponge and by the time you’re done, the teapot will look like new.

Get rid of tile grout: Because it’s caustic, Coca-Cola can lessen tile grout stains and build-up. Wet the grout with Coke and let the area sit for a few minutes before wiping with a clean cloth. Repeat until the grout is clean.

Remove marker stains from carpet: To remove a marker stain, soak the area in Coke for a few minutes, before blotting up the excess liquid and diluting the area with water. Keep blotting until the liquid has been absorbed.

Unclog garbage disposal: Pour Coke down your garbage disposal and wait for the fizzing to stop. Then rinse with hot or boiling water. The Coke and hot water should be enough to help break down the gunk and clean the disposal.

We always hear soda isn’t good for you, but it could have some surprising health effects.

Relieves nausea: Drinking flat Coca-Cola will help relieve a queasy stomach. Avoid regular carbonated Coke since that could agitate your stomach and make it feel worse.

Soothe jellyfish stings: If you find yourself stung by a jellyfish, a little bit of Coke could help. The acid of the soda will help combat the jellyfish venom and ease the pain.

Don’t cut the gum out of hair before soaking it in Coke.modenadude/Flickr

Get gum out of hair: If you or someone else has gum stuck in your hair, pouring a little Coke over the gum will help it slide right out.

Fades hair dye: If you got a dye job that you don’t like or if the color looks too vibrant or dark, you can wash some of the color out with a can of Coke.

Texturize hair: Model Suki Waterhouse recently admitted she rinses her hair with Coca-Cola to give it more texture. It also gives your hair some extra body and bounce, which is a plus as well.

A concoction of Coke, beer, soap, mouthwash, and ammonia will make your lawn look amazing.

Lawn tonic: Combine a can of regular (read: not diet) Coke with a can of beer, dishwashing soap, household ammonia, and a cup of mouthwash and put it in a 10-gallon hose-end sprayer to dilute the mixture. Spraying this on your lawn a few times a week will keep it green and thick.

Keep bugs away outdoors: If you’re having a picnic or have food that bugs keep coming over to inspect, fill a bowl with Coca-Cola and place it far away from you. The sugar will draw the bugs to the bowl and away form you and your food.

Eliminate oil stains: Coke will help get rid of any oil stains on your driveway or in the garage. Pour Coke over the stains, scrub with a brush, and then rinse with water.

Kill slugs: If slugs or snails are overrunning your garden and plants, you can lure them away with a small bowl of Coca-Cola. The soda will attract and kill the pests, leaving your garden slug-free.

Defrost windshield: Pour a can of Coke onto your car’s windshield if you’re out of windshield-wiper fluid or don’t have a scraper. Just avoid getting it on the paint, since the corrosive soda can ruin the paint job.

Pesticide: Coke and Pepsi were both rumored to have been used by farmers in India where the sodas are cheaper than traditional pesticides. Though this is unconfirmed, soda does actually work rather well as a pesticide since it not only attracts the bugs but also kills them. Spray or pour a little Coke next time on any unwanted ant hills.

Kickstart compost pile: A can of Coke will infinitely help your compost pile. All you need to do is pour in the soda, and the mildly acidic soft drink will help break down all the organic matter in your compost and attract micro organisms that will be helpful in the composting process.

Clean bugs from car windshield: If you have a lot of dead bugs and grime on your windshield, pour a can of Coke over it. Let it sit, and then wipe down with a damp cloth to easily remove any residue. Rinse with water to keep Coke from damaging the car’s paint.

Pool cleaner: A few sites say that if you pour two two-liter bottles of Coca-Cola into your pool, you’ll notice a significant change in your pool’s appearance for the better once the pool has cleaned out the soda. No more iron or rust stains!

Clean car batteries: If your car battery is looking corrosive, you can clean it with Coke. Since Coca-Cola is a mild acid and the corrosion is a mild alkali, it causes a chemical reaction and remove the corrosion.

Mixing brownie mix with Coke will have surprisingly delicious effects.

Brownies: By mixing together a box of fudge brownie mix and a can of Diet Coke, you can get perfectly cooked, moist brownies in under half an hour.

Jell-O: You can substitute any type of Coca-Cola with the water in a Jell-O recipe to create a sweet and soda-themed version of the classic. The blog Something Swanky has some good combination ideas, like lime Jell-O with regular Coke.

Chicken drumsticks: This recipe only takes three ingredients: Coke, soy sauce, and chicken wings. Throw everything in a slow cooker and set it on low for six hours. Once the wings are tender, pour the leftover liquid into a pot, simmer it down to a glaze, and then pour over wings.

Barbecue sauce: Combine Coca-Cola with ketchup, Worcestershire sauce, and a few other seasonings of your choice. Simmer the mixture, and it will turn into the delicious BBQ sauce of your dreams.

Cupcakes: Combine Diet Coke with a box of chocolate cake mix — it will fizz at first, but don’t freak out. Pour the batter into a cupcake pan and cook for about 20 minutes. Top with powdered sugar.

Pot roast: A can of Coke combined with au jus, McCormick’s slow cooker Savory Pot Roast season packet, and the rib roast itself will make an amazing meal. Slow cook the roast and seasoning for eight hours on low in a crock pot for tender and delicious results.

Baste a ham: Combining Coca-Cola with a little brown sugar and crushed pineapple will make for a delicious dinner that’s very easy to make. See a recipe here.

“Dirty Diet Coke”: The blogger community went crazy for this easy-to make recipe. Combine Diet Coke with half and half milk, coconut syrup, and a squeeze of lime. Drink and enjoy.

Cocktails: Mix your alcohol of choice with any Coke product and then add any accoutrements you’d like. Here are some recipes to get you started.

Mentos dropped into Coca-Cola will create a soda geyser.

Exploding Mentos: Drop a few Mentos mints into a two-liter bottle of Diet Coke to create a Coke geyser. This is “MythBusters” tested and incredibly fun.

Skunk odor killer: Though tomato juice works better, Coke is an effective skunk odor remover. Rub the soda into your hair and skin and let sit for a few minutes. Then rinse off with soap and water. This will also work well for any skunked animals.

Loosen rusted bolts: If you happen upon a rusted bolt that you can’t undo, soak a hand towel in Coke and apply it to the area for a few minutes. Continue soaking the bolt until most of the rust has been removed and comes off on the towel. After the bolt is removed, rinse the area with water to avoid stickiness.

Make antique-y pictures or letters: Coke can give paper an aged or antique look in lieu of coffee or tea. Just soak the paper in Cola, wipe off excess liquid after letting it sit, and dry in the oven for five minutes or until the paper has dried and the edges start to warp.

My name is Jeff. I was born and bred in Brooklyn, New York. Since 1991, I have lived in South Florida and have eaten in so many restaurants down here, that I now consider myself to be a food expert. END_OF_DOCUMENT_TOKEN_TO_BE_REPLACED