This article first ran on 11/13/17. Jeff Eats just checked the Boca Black Box- Box Office and goldstar.com (discount tickets) and there are a handful of tickets left for tonight’s 8pm and 10pm shows- trust Jeff Eats when I tell you- that you don’t want to miss Bobby Collins! 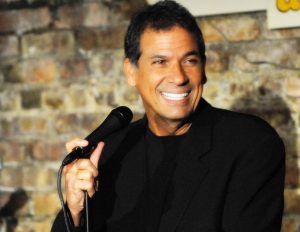 Jeff Eats and Mrs. Jeff Eats have seen Collins 4- times and each and every time he blew the audience away!

If you haven’t seen Bobby Collins, just go- you will absolutely love him!

Just between you guys and Jeff Eats, Collins has a huge fan base- so I’m thinking SRO for both shows!

Comedian Bobby Collins has an ability to truthfully translate the human condition. Through precise physical timing and impeccable audience insight, he has honed his talents while performing from hole in the wall clubs to sold out theaters. His true dedication to his craft is what keeps his vibrant shows consistently sold out.

A native New Yorker, Collins possesses a confidence and genuine everyman likeability that can only be earned. He knows what it’s like to work a day job, in order to pursue a dream. He’s flipped his share of burgers, as well as signing on as a substitute high school history teacher, to pay the bills – all the while performing in comedy clubs at night.

Realizing his dream has given Bobby the opportunity to tour with titans of entertainment like Frank Sinatra, Cher, Julio Iglesias and Dolly Parton. As a professional stand-up comedian, he’s worked alongside friends, Chris Rock, Ray Romano and Drew Carey, as well as many others. Rosie O’Donnell specifically requested that Bobby take over as host for Stand-Up Spotlight. Collins is widely regarded as a “comic’s comic.”

My name is Jeff. I was born and bred in Brooklyn, New York. Since 1991, I have lived in South Florida and have eaten in so many restaurants down here, that I now consider myself to be a food expert. END_OF_DOCUMENT_TOKEN_TO_BE_REPLACED