Real simple tale to tell you guys, Jeff Eats and Mrs. Jeff Eats are big Bruce Of Great Neck fans! Trust Jeff Eats when I tell you, that Bruce’s is one of Florida’s better breakfast-lunch bagel joints and its in-house baked goods are off the chart good! 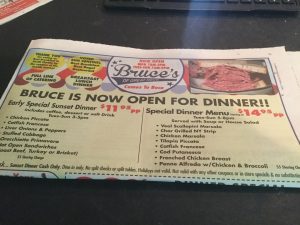 Real simple tale continued, Bruce’s just (actually it was on 11/2/17) announced that it has expanded its Monday 7am-3pm /7 days a week operation- to now include an $11.95 Early Special Sunset Dinner, Tuesday-Sunday/3pm-5pm and a $14.95 Special Dinner Menu, Tuesday-Sunday/5pm-8pm.

So- if you haven’t yet tried Bruce’s Of Great Neck- you now have another really good reason to give it a shot! 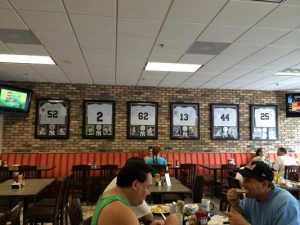 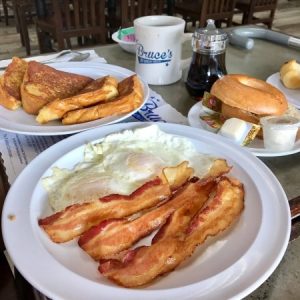 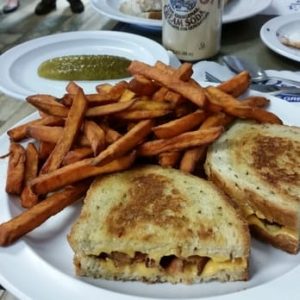 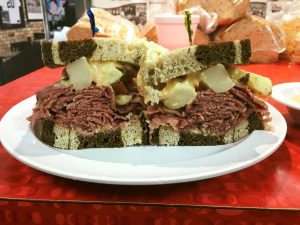 Here’s a heads up for you guys…

Jeff Eats has absolutely no idea as to why the last NY-Bruce’s closed in February 2012…what I do know, is that about four months ago, Bruce Zipes (“Bruce”) bought the Mitch’s Westside Bagels Too (reviewed 2/9/09) Boca Raton store, renaming it Bruce’s Of Great Neck. Like Mitch’s, Bruce’s Of Great Neck does breakfast/lunch 7 days a week–open 7am-3pm.

Just so we are straight, 1991 was the last time that Jeff Eats “ate” stuff from Bruce’s New York outposts. For the purposes of this column, I’m gonna assume that Mr. Zipes still knows how to bake- but then again back in ’91 Jeff Eats had a 33 inch waist and wore a 15-31 shirt.

To make a long story short, yesterday I stopped by Bruce’s Of Great Neck around 3pm just as the store was closing for the day. My sole purchase was a bakers dozen of bagels—and I gotta tell you, that the everything/garlic/onion/pumpernickle/whole wheat were -really good…I will also tell you, that Bruce’s display cases were filled with great looking cookies, cakes, pastries, rolls.

The big question: Is Zipes’ plan to make Bruce’s Of Great Neck “like” Bruce’s Bakery & Restaurant namely 1/2 bakery–1/2 deli…or is the plan to keep the “generic” bagel formula that Westside had?

Let’s wrap this one up…first, if you are confused by all of the Bruce’s here, me too!- second, you guys now know about Bruce’s Of Great Neck a new “?” in Boca Raton.

Jeff Eats has Bruce’s on his “try” list. I’ll keep you guys posted as to what’s what!

This morning, Jeff Eats and Mrs. Jeff Eats finally got a chance to “get over” to Bruce’s for breakfast.

Real simple order… western omelet/home fries/toasted-everything bagel and an American cheese omelet/home fries/toasted onion bagel–all A-OK! When we sat down, the waitress delivered a complimentary plate of “baked goods” samples–which was a real nice touch. When leaving, we purchased a chocolate babka and I gotta tell you, the babka was off the chart–absolutely delicious. We also “took home” 1-lb. of chicken salad, 1-lb. of tuna salad -really good stuff. On prices/service–South Florida bagel store-norm. One strange thing, we also took home a mixed dozen-bagels and I gotta tell you these “13” weren’t as good as the bagels we had gotten back in December. Now nothing for nothing, they weren’t terrible or anything like that- but I can name right off the top of my head 11 Boca Raton-Delray Beach bagel joints that make better ones. Sorry, but I can’t explain why the “batches” were different. Hopefully, Bruce’s will figure this-puzzle out.

Trust Jeff Eats on this one, Bruce’s Of Great Neck is a real good (that’s assuming the bagel “puzzle” is figured out) bagel-deli!

My name is Jeff. I was born and bred in Brooklyn, New York. Since 1991, I have lived in South Florida and have eaten in so many restaurants down here, that I now consider myself to be a food expert. END_OF_DOCUMENT_TOKEN_TO_BE_REPLACED