Trust Jeff Eats on this one, both birds-are absolutely terrific!

Now, you guys and Jeff Eats both know that “food reviewing” is purely a subjective call, with that in mind- for you guys who maybe wondering, Jeff Eats “rates” Walmart’s lemon pepper and traditional rotisserie chickens heads and shoulders above Costco and Publix’s birds!

If you haven’t yet tried Walmart’s birds, go for it- for $4.98 a bird you really have nothing to lose! 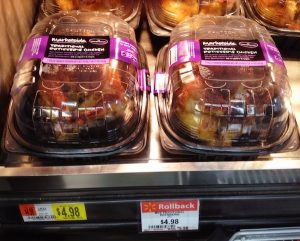 Got a real simple story to tell you guys…

For years, Jeff Eats’ very dear friend Roy has been telling me that Walmart’s Lemon Pepper Rotisserie and Traditional Rotisserie Chickens were sensationally delicious- and for years Jeff Eats has paid his very dear friend Roy no mind!- That is until yesterday at 3:46pm when Jeff Eats and Mrs. Jeff Eats just happened to notice a 7 person line waiting at the deli-counter in the Walmart located on Military Road & Linton Avenue in Delray Beach for Lemon Pepper Rotisserie and Traditional Rotessire Chickens which were coming-off 2- huge rotisserie grills. To make a long story short, in the span of 4 minutes Jeff Eats counted 12 1 lb. 13 oz. $4.99 birds being “snatched up” -with two (1 Lemon, 1 Traditional) of them finding their way into Jeff Eats and Mrs. Jeff Eats’ shopping cart!

Let me wrap this one up for you guys, Jeff Eats’ very dear friend Roy was absolutely right Walmart’s Lemon Pepper Rotisserie and Traditional Rotessire Chickens were sensationally delicious. For you guys “into” Costco, Publix, Winn Dixie, Whole Foods, Boston Market trust Jeff Eats when I tell you that “their” rotisserie chickens are no match for Walmart’s Lemon Pepper Rotisserie and Traditional Rotessire Chickens. Now you guys and Jeff Eats both know that “taste” is a subjective thing- what you like -I may hate and vice versa, so do what you’d like with the above Walmart Chicken Information!-and those of you with any sense of good taste can thank Jeff Eats later!

My name is Jeff. I was born and bred in Brooklyn, New York. Since 1991, I have lived in South Florida and have eaten in so many restaurants down here, that I now consider myself to be a food expert. END_OF_DOCUMENT_TOKEN_TO_BE_REPLACED