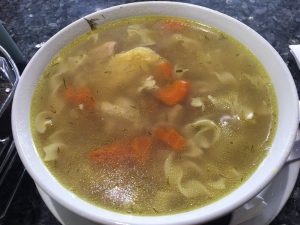 For you guys who maybe wondering as to where Jeff Eats and Mrs. Jeff Eats will be “eating” our Rosh Hashanah Dinner tonight, Wednesday/September 20, 2017- well wonder no more…our Boca Raton home!

To be perfectly honest with you guys, it was a toss-up between catering in/or eating at Zinger’s Delicatessen-in any event, Jeff Eats and Mrs. Jeff Eats “will be” footing the entire bill for us plus 7! Trust Jeff Eats when I tell you that there’ll be plenty of Zinger’s food- not to mention all the other stuff that Mrs. Jeff Eats ordered from The Boys Farmers Market in Delray Beach and the Publix by our house in Boca Raton. One thing for sure, home or out, there’ll be plenty of drama ’round the old dining room table!

By the way, if Zinger’s doesn’t work for you, Jeff Eats got a load of “stories’ about other Florida top-notch New York Kosher/Kosher Style Delis and Bagel joints all of which- will definitely get the job done for you!

A Happy New Year to All, and to all a good night!- sorry, wrong holiday!

My name is Jeff. I was born and bred in Brooklyn, New York. Since 1991, I have lived in South Florida and have eaten in so many restaurants down here, that I now consider myself to be a food expert. END_OF_DOCUMENT_TOKEN_TO_BE_REPLACED