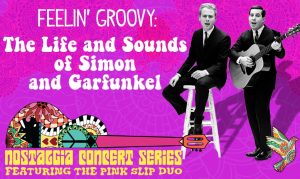 * Feelin’ Groovy: The Life and Sounds of Simon and Garfunkel.

Jeff Eats and Mrs. Jeff Eats are down for this one.

Trust Jeff Eats, I know that Garfunkel and Starr have legions of fans, so on and so forth- just stirring the pot here!

Like I just said, Jeff Eats and Mrs. Jeff Eats are down for this one!

Paul Simon and Art Garfunkel rose to prominence in 1966 with voices that blended like siblings’, applying Everly Brothers-inspired harmonies to Simon’s songs. They quickly became the most popular folk-rock duo of the sixties. This program traces the arc of Simon and Garfunkel’s success from their childhood beginnings in Queens, N.Y., when they began singing together at age 12.

By 1963, the duo had already built a reputation around Greenwich Village, after singing together throughout high school and cutting a record as 16-year-olds. But, their debut album for Columbia languished until their producer secretly went back into the studio and added electric guitar, bass and drums to “The Sound of Silence,” and Simon and Garfunkel had a #1 hit. They released six albums, winning 10 Grammy Awards, and you’ll hear many of those beloved songs performed amid stimulating commentary on their career as a duo and on their personal lives. This unique and memorable program blends dramatic slides with a live performance of their intricate close-harmony songs by Joan Friedenberg and Bill Bowen, who sing professionally as the PinkSlip Duo. And, lyrics to the songs will be projected for audience sing-along.

My name is Jeff. I was born and bred in Brooklyn, New York. Since 1991, I have lived in South Florida and have eaten in so many restaurants down here, that I now consider myself to be a food expert. END_OF_DOCUMENT_TOKEN_TO_BE_REPLACED