Jeff Eats and Mrs. Jeff Eats have seen John Ferrentino’s act and I must tell you- that he will amaze and crack you up all night long! 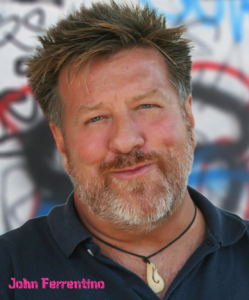 from bocablackbox.com
New York comedian John Ferrentino’s career spans over forty years. He is an inventor of illusions and a true pioneer in the field of stand up comedy magic. John has appeared on over fifty television shows including HBO, VH1, SHOWTIME, A&E and the COMEDY CHANNEL and was a regular guest on FOX’S COMIC STRIP LIVE for five years in addition to performing as the opening act for Crosby Stills and Nash. John has performed around the world on every major cruise line. He is also a regular performer at the world famous MAGIC CASTLE in Hollywood.

This is a show you don’t want to miss.

Out of His Mind and into Your World

My name is Jeff. I was born and bred in Brooklyn, New York. Since 1991, I have lived in South Florida and have eaten in so many restaurants down here, that I now consider myself to be a food expert. END_OF_DOCUMENT_TOKEN_TO_BE_REPLACED