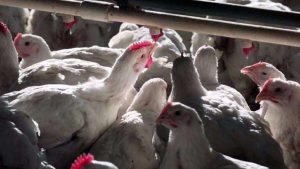 Perdue will increase its use of gas stunning, according to the first annual progress report on animal care released by Perdue on Monday. The process exposes birds to a gas mixture that renders them insensible to pain or distress before slaughter. (J.SCOTT APPLEWHITE / Associated Press)

Just read this article on bloomberg.com.

Not sure where Jeff Eats is going with all of this- but I’m sure that the chickens who read the article were thrilled with the good-news!

Perdue Farms, known for its namesake chicken brand, is rolling out gentler slaughter practices as part of its efforts to reduce trauma and discomfort for birds.

The company will increase its use of gas stunning, according to the first annual progress report on animal care released by Perdue on Monday. The process exposes birds to a gas mixture that renders them insensible to pain or distress before slaughter.

It’s the latest step in the poultry industry’s campaign to respond to consumers, especially Millennials, who are increasingly concerned about animal welfare. The Salisbury, Maryland-based company, the fourth-largest U.S. chicken producer, is pushing for better poultry care, improved relationships with its contract farmers and transparency with consumers, according to Chairman Jim Perdue.

“There are a lot of reasons for us to move forward on better care,” Perdue, whose grandfather started the company in 1920, said in a telephone interview. “It’s good for the chicken, farmer and the meat.”

The company will introduce the gas stunning at a Delaware chicken plant in November and gradually implement it in all its facilities. The process is already used at its turkey plant in Indiana.

Discerning consumers are rapidly leaving their mark on U.S. agriculture, whether it’s through surging demand for organic products, increasing focus on food that’s considered sustainable, or greater attention on animal treatment. The poultry industry has come under fire after reports from activist groups in recent years highlighted poor conditions for both animals and employees. Last month, Tyson Foods Inc., the largest U.S. chicken producer, introduced a series of measures to make its operations more humane.

“Not only is it the right thing to do for the birds, but it’s the right thing to do for the business, given the certain direction of the market,” Leah Garces, the U.S. executive director of Compassion in World Farming, said in a statement. Perdue’s efforts will put pressure on other poultry producers to do the same, Josh Balk, vice president of farm animal protection at the Humane Society of the U.S., said in a a telephone interview.

Perdue is also continuing to study slower growing birds. The industry has been criticized for producing fast growing big birds with disproportionate top half for white meat. Some animal welfare groups have filmed birds that can’t walk under their weight because of faster growing.

One Comment to “Chicken Slaughter Gets Makeover As Perdue Addresses Welfare”

My name is Jeff. I was born and bred in Brooklyn, New York. Since 1991, I have lived in South Florida and have eaten in so many restaurants down here, that I now consider myself to be a food expert. END_OF_DOCUMENT_TOKEN_TO_BE_REPLACED