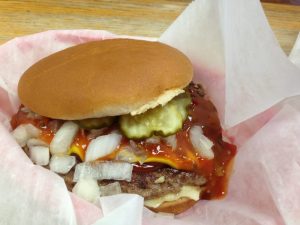 The game- the first 25,”reader-comments” received – will be entered in a “blind hat pick”! You can submit as many comments as you’d like but- Please, only 1- reader comment – per day…play fair! 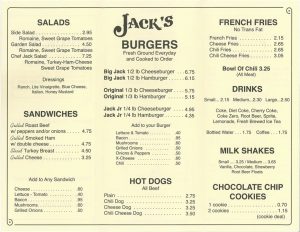 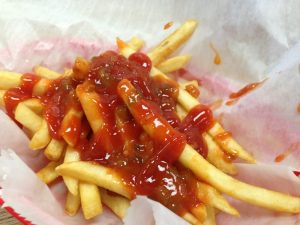 Jack’s is a fast-food hamburger joint. Jack’s has other stuff, but HAMBURGERS ARE THE GAME. Both Jack’s locations are literally “landmarks.” They are always busy. The hamburgers are very-very good. The fries are okay, but nothing to write home about. Over the years, I must have eaten (combined) in the 2 different locations something like 30 times. These joints are fast-food joints circa 1970. I like the “unmodern” (if that’s a real word) look…old tables and no stainless steel/formica/vivid colors/signage that joints like Burger King, Wendy’s etc have. I also like the “crowd” that these joints draw. Guys in suits, families, blue color workers…the parking lots, have cars in every price range…the point, Jack’s has a legendary following in South Florida.

Now for the good news and bad news…To be perfectly honest with you, I use to make special trips to eat at Jack’s…Now that Five Guys Burgers & Fries has started to open in the South Florida market, I would rather eat at Five Guys than Jack’s. Like I said, Jack’s hamburgers are very-very good… while Five Guys’ hamburgers and fries are terrific. Though it’s a story for another day, Five Guys Burgers & Fries is quickly developing a cult following in South Florida…and for that matter, all of the United States.

My name is Jeff. I was born and bred in Brooklyn, New York. Since 1991, I have lived in South Florida and have eaten in so many restaurants down here, that I now consider myself to be a food expert. END_OF_DOCUMENT_TOKEN_TO_BE_REPLACED