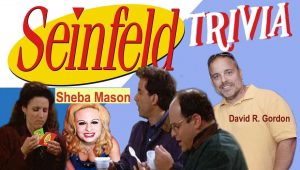 As the old Japanese saying goes- You gotta pick your battles wisely!

The Emmy-winning hit sitcom Seinfeld, also known as “the show about nothing,” ruled the zeitgeist in the ’90s with its memorable bits and catch-phrases, and even launched the holiday Festivus, which is still celebrated today. Join stand-up comics Sheba Mason (daughter of Jackie) and David R. Gordon at the Empire Stage in Lauderdale for a trivia contest, complete with included wine and prizes, that’ll test your grasp of such topics as “double dipping,” “regifting,” “man hands,” “puffy shirts,” “shrinkage” and “sparing squares” and such characters as Newman, Art Vandelay, Uncle Leo, Puddy and the Soup Nazi — not that there’s anything wrong with that.

My name is Jeff. I was born and bred in Brooklyn, New York. Since 1991, I have lived in South Florida and have eaten in so many restaurants down here, that I now consider myself to be a food expert. END_OF_DOCUMENT_TOKEN_TO_BE_REPLACED