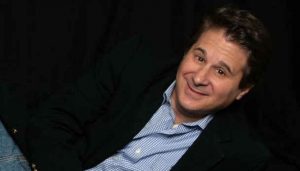 Real simple tale to tell you guys- over the past 7 years Jeff Eats and Mrs. Jeff Eats have seen Delray Beach resident- national touring headlining “clean” comedian Peter J. Fogel’s stand-up act something like 12 times and each and every time he absolutely killed!

Trust Jeff Eats on this one, you want to see Peter J. Fogel’s show!

While Peter J. Fogel might be “America’s funniest comedian you’ve never heard of,” you have seen him. Maybe it was opening Robert Klein’s HBO special, or headlining Caroline’s in NYC or (back in the wild ’80s) appearing as the “Ring Around the Collar Man” in the beloved Wisk detergent commercials … but, chances are, you have caught sight of this multi-talented comic and current star of the national tour of My Mother’s Italian, My Father’s Jewish & I’m in Therapy. Now you can see him up close (and in glorious form) when he brings his characters, voices and hilarious observations to Boca Black Box for a night of stand-up comedy.

My name is Jeff. I was born and bred in Brooklyn, New York. Since 1991, I have lived in South Florida and have eaten in so many restaurants down here, that I now consider myself to be a food expert. END_OF_DOCUMENT_TOKEN_TO_BE_REPLACED