For the past several months, Son Jeff Eats has been raving about how delicious Trader Joe’s Steamed Chicken Soup Dumplings were/are! 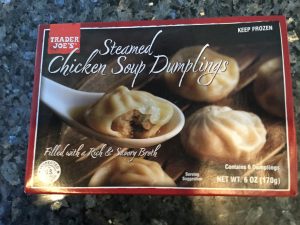 You can check traderjoes.com for store locations/info. 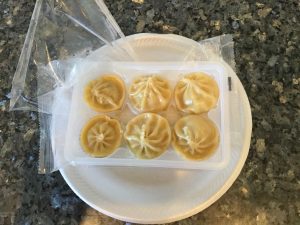 from traderjoes.com
After enjoying similar dumplings in a local dim sum eatery, our buyers went on a quest to create similar dumplings we could sell in our freezer case. It was a long road, because these dumplings, known as xiao long bao, need to be stuffed with not only a ground chicken filling, but also a savory broth, before freezing. We kept at it, for months. The flavor of the filling was right but the dough was too thick. The dough was just right, but the broth kept leaking out. And then finally, one fateful day, everything came together.

Trader Joe’s Steamed Chicken Soup Dumplings are just that: a soft dumpling filled with chicken and a rich, savory broth. They come in a microwavable tray, and heat in two minutes or less. Once they’re heated through, we recommend some simple steps to amplify your enjoyment. First, you carefully remove them from the tray, taking care not to puncture the dough. This is important because you really don’t want to lose the soup inside. Yet. Place a Soup Dumpling on a large spoon and bite a small hole, big enough to let the gingery broth run out into the spoon – this is the step where you want the soup to come out, not before. Let them cool for just a bit – they’ll come out of the microwave very hot. And then, finally, put the whole thing – spoon, soup, dumpling – into your mouth and let the flavors, textures, and aromas treat you to that same dim sum experience that began our quest in the first place.

We haven’t seen dumplings like this in any other stores, and they’re challenging to find even in dim sum restaurants. But we have them in the freezers at Trader Joe’s, where we’re selling each six ounce box of six for $2.99, every day.

My name is Jeff. I was born and bred in Brooklyn, New York. Since 1991, I have lived in South Florida and have eaten in so many restaurants down here, that I now consider myself to be a food expert. END_OF_DOCUMENT_TOKEN_TO_BE_REPLACED