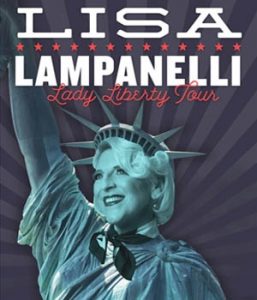 If you can handle BLUE- you will absolutely love her! 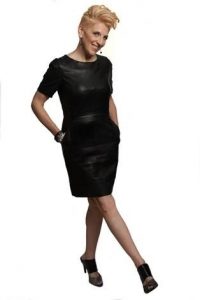 Lisa Lampanelli:
Lisa Lampanelli is known as Comedy’s Lovable Queen of Mean. This equal
opportunity offender is a regular on Howard Stern’s Sirius satellite radio
shows, and she has appeared on “The Tonight Show with Jay Leno,”
“Late Show with David Letterman,” “Chelsea Lately,” “Jimmy Kimmel
Live,” “The Dr. Oz Show” and “Good Morning America.” She was also a
member of the cast of NBC’s “Celebrity Apprentice,” Season 5.

In 2009, Lisa entered the ranks of comic greats and premiered her
first ever one-hour HBO comedy special, “Long Live the Queen,” to
tremendous ratings. That same year, her autobiography, “Chocolate,
Please: My Adventures in Food, Fat and Freaks,” hit bookstores to
critical acclaim.

Lisa is well-known for her many Comedy Central and Friars Club roasts.
She has lambasted Jeff Foxworthy, Pamela Anderson, David Hasselhoff,
Betty White, Donald Trump and Flavor Flav to name a few. Plus, she was
honored to serve as roastmaster on the Comedy Central Roast of Larry
the Cable Guy.

Lisa’s second one-hour special, “Dirty Girl,” was nominated for a
Grammy Award for 2007′s Best Comedy Album of the Year. And in 2012,
Lisa was thrilled to be cast as Aunt Josie in the highly anticipated
feature film debut from “Sopranos” creator David Chase entitled, “Not
Fade Away,” starring James Gandolfini. Lisa also starred as a series
regular on “Bounty Hunters,” CMT’s first-ever animated show. Currently,
Lisa is making a departure from her signature “insult” comedy with her
first developmental theater production, Fat Girl Interrupted, to show a side
of Comedy’s Lovable Queen of Mean that few would guess exists.

My name is Jeff. I was born and bred in Brooklyn, New York. Since 1991, I have lived in South Florida and have eaten in so many restaurants down here, that I now consider myself to be a food expert. END_OF_DOCUMENT_TOKEN_TO_BE_REPLACED