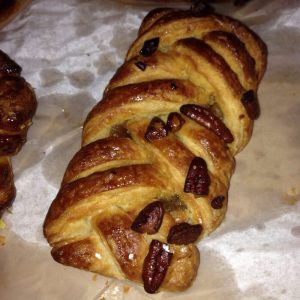 If this joint was “closer” to Jeff Eats’ Boca Raton abode, I’d weigh something like 545 lbs! Look!-based on my double chin…

It would be fair to say, that Jeff Eats in his day, has eaten his fair share of danish and croissants…with that in mind- the cinnamon swirl, maple pecan plait and chocolate bun that I recently had- were delicious.

Trust me on this one, you ain’t gonna find stuff like this at Publix or specialty markets like Doris Italian Market & Bakery or Joseph’s Classic Market.

Really have no opinion on the brewed coffee that I had…to this very day, Jeff Eats can’t quite wrap his head around the $2.50-$—(you fill in the number) cup of coffee concept…I still remember 10 cent-cups at Brooklyn’s- Garfield’s Cafeteria circa 1965–gonna sound crazy, but give or take-all black coffee tastes good to me.

While I’m on the subject of coffee-bet you a buck that in a blind taste test- Julio Valdez or whatever the hell his name is/was (I know it’s Juan) couldn’t tell one coffee bean from another-for sure this guy, Robert Schultz got a ton of people drinking the Kool-Aid… But that’s just what Jeff Eats thinks! As my late uncle by marriage Sam Ting use to say…”Jeff Eats, bet you a buck-that if I blindfold you-you couldn’t tell the difference between Coke and Pepsi.” Uncle Sam was a very bright man–who knew a-lot of “things.”

My name is Jeff. I was born and bred in Brooklyn, New York. Since 1991, I have lived in South Florida and have eaten in so many restaurants down here, that I now consider myself to be a food expert. END_OF_DOCUMENT_TOKEN_TO_BE_REPLACED