Just checked the Mizner Park Cultural Center box-office (miznerparkculturalcenter.com) and goldstar.com (discount tickets) and there are a few seats left for Jackie “The Joke Man” Martling’s- Saturday, January 4th, 2020 (7:30pm) show at the Mizner Park Cultural Center- so if you wanna go, I’m kinda thinking that if you don’t already have tickets- it’s time to make your move on the ticket front! Trust Jeff Eats on this one, this guy Martling is off the chart funny! 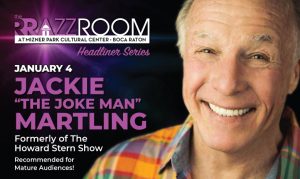 My name is Jeff. I was born and bred in Brooklyn, New York. Since 1991, I have lived in South Florida and have eaten in so many restaurants down here, that I now consider myself to be a food expert. END_OF_DOCUMENT_TOKEN_TO_BE_REPLACED