Trust Jeff Eats on this one, Carie Karavas and Eric Haft are two of the funniest comedians currently working the comedy club/convention/casino/theater circuit! 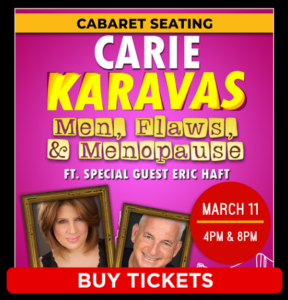 CARIE KARAVAS is a tough, street smart, and wisecracking stand-up comic that has been taking the New York City comedy club scene by storm and the national club scene as well. Her tough exterior along with her hard-hitting style of delivery keeps her audiences constantly on guard for big laughs. She is extremely versatile with her style and is adaptable to any audience. She is a definite crowd pleaser and a complement to any show. She has appeared on Comedy Central, New Joke City and has been featured at the world famous Montreal Comedy Festival, Mohegan Sun, Las Vegas. Carie has also appeared on the Kevin can wait Show on CBS.

ERIC HAFT
Born and raised in New York, has appeared in such classic venues as The Borgata in Atlantic City, Caroline’s on Broadway, Gotham Comedy Club and is a regular touring act with The LI Comedy Festival. He has also appeared with Kevin James, Kevin Meaney and Rob Schneider as well as many other top Comedians throughout the country.

My name is Jeff. I was born and bred in Brooklyn, New York. Since 1991, I have lived in South Florida and have eaten in so many restaurants down here, that I now consider myself to be a food expert. END_OF_DOCUMENT_TOKEN_TO_BE_REPLACED